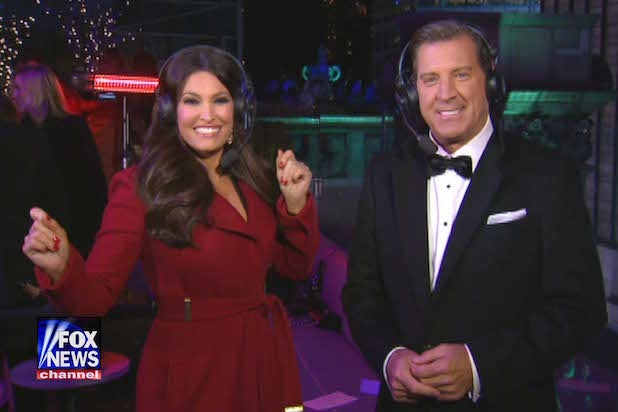 Eric Bolling and Kimberly Guilfoyle, co-hosts of Fox News Channel’s “The Five,” don’t think 2016 was so bad, no matter what members of the liberal media say about it.

“I must have missed the memo because I think 2016 was fabulous,” Guilfoyle told TheWrap. “What a fantastic year. What an incredible presidential election. We loved covering it on ‘The Five,’ and we had front-row seats to American political history.”

Bolling agrees with his co-host, but thinks it depends on your perspective and realizes he probably enjoyed 2016 more than some cable news competitors.

“For us, we spent the summer covering the election — as Kimberly points out — accurately and our ratings have done nothing but skyrocket and we’ve held our ratings in the post-election world where some others are probably a bit envious of what we’ve been able to continue to do,” Bolling told TheWrap. “I think 2016 was great.”

Bolling and Guilfoyle clarified that they were not referring to the notable celebrity deaths of 2016, a year that has claimed the lives of Prince, David Bowie, Muhammad Ali, Glenn Frey, Nancy Reagan, Phife Dawg, Harper Lee, Carrie Fisher, George Michael, Garry Shandling and a ton of other stars and political figures. Instead, the duo focused on what it considers newfound hope for Americans.

“If you look at all the consumer sentiments and optimism, there is a new poll out that says 55 percent of America thinks that 2017 is going to be a better year than ’16. I think there is a whole new change in D.C. and in the media with the Donald Trump presidency,” Bolling said. “I think there is a bunch of optimism coming in with it.”

Guilfoyle said she is “really excited” to see what happens to the country when Trump is sworn in on Jan. 20.

“It’s a great time to work at Fox News and be able to cover all this every day,” Guilfoyle said.

Guilfoyle and Bolling will host the network’s New Year’s coverage live from Times Square in New York City with “All-American New Year,” something that has become an annual gig for the pair.

“Last year we were broadcasting from atop the Knickerbocker hotel above Times Square. This year we’re down right in the middle of the action,” Bolling said before Guilfoyle chimed in: “We love to get down and talk to the fans … we like to be down there with everybody.”

Despite finishing the year as the most-watched network in all of cable, 2016 wasn’t completely flawless for Fox News. Former CEO and co-founder Roger Ailes stepped down in disgrace last summer amid sexual harassment allegations, but Bolling called the transition to a post-Ailes era “seamless” for the network.

“The post-transition Fox News has been, really, extremely strong. That’s a testament to the management from the Murdochs [down] … the management kept the vision,” Bolling said. “They kept the ship in the right direction and we’re benefiting from that on the backside of the transition.”

Bolling said “The Five” hasn’t changed under the new regime because “nobody has ever told us, even at the beginning, before or after the transition, what kind of content we should be covering.”

“That’s part of the beauty if it,” Guilfoyle added. “They don’t micromanage us.”

“All-American New Year” kicks off at 11 p.m. ET on New Year’s , but Fox News Channel coverage begins at 8 p.m. with Jesse Watters and Lisa “Kennedy” Montgomery hosting before handing off to Guilfoyle and Bolling.