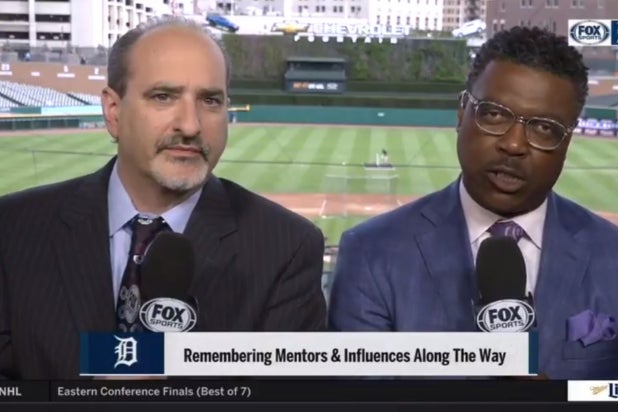 Mario Impemba and Rod Allen, the play-by-play duo that covered the Detroit Tigers for Fox Sports Detroit, will not return for the 2019 season, weeks after the two were involved in a physical altercation with each other.

The Detroit Free Press reported Tuesday night that the two would not be coming back. Reps for Fox Sports and the Tigers did not immediately respond to TheWrap’s request for comment.

According to the Free Press, Impemba’s contact was up after this season anyway, while Allen’s had a network option for 2019, which is being settled with lawyers. Impemba and Allen had been calling Tigers games for the past 16 years, but tensions had been simmering between the two for quite a while.

They had managed to form a productive on-air relationship, despite not seeing eye-to-eye for “a long time,” The Athletic reported, but everything came to a head on Sept. 4, the night of the fight between the two. The Free Press, speaking with multiple sources, reported a bit more on what happened that night.

During the game, there was a “43-second” blackout because Impemba, reported to have been annoyed but what he thought was Allen’s fixation on his phone rather than the game itself, “boycotted” speaking into the microphone in retaliation. It gets even more petty during the pre-game spat, and we’ll just let the Detroit Free Press tell it themselves:

There were three chairs in the tightly packed booth, only one of which was sturdy: one Impemba had mindlessly or, perhaps carelessly, decided to occupy when it rested in his broadcast spot. Allen has had back issues and rigid seats are important. When he arrived, he expected the more supportive chair to be his.

Impemba, according to a source, said nothing but was steamed as he turned it over. Impemba’s ire was obvious and now Allen was miffed: “Are you mad that I took this chair?” he asked, according to the source.

The fight was apparently bad enough that, per The Athletic, the two had to be booked on separate flights back to Detroit following the Sept. 4 game in Chicago. The Free Press also added that three NBC Sports Chicago freelancers had to break up the fight, which didn’t last very long, after Allen placed his hands on the sides of Impemba’s neck.

The two had worked more than 2,000 Tigers games together.