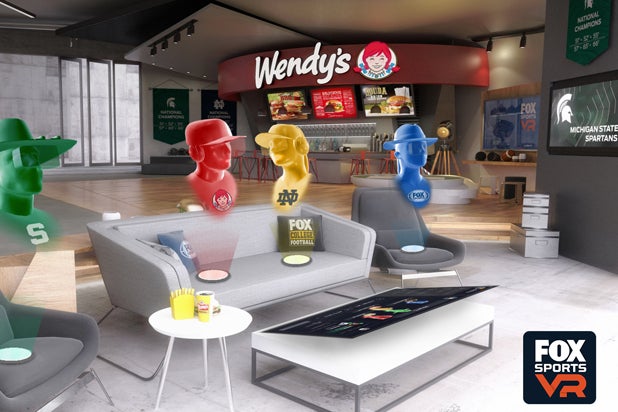 Touchdown Jesus, meet Oculus. Saturday’s matchup between the Notre Dame Fighting Irish and Michigan State Spartans, two of college football’s most venerable teams, will be broadcast in one of the newest formats: social virtual reality.

Fox developed the experience, presented by Wendy’s, with LiveLike, which worked with the network to create the social VR technology it debuted during this summer’s CONCACAF Gold Cup soccer tournament. But this time, it’s coming to one of college football’s oldest – and often, one of its most exciting – rivalries, Notre Dame versus Michigan State, who clashed for the first time in 1897.

The virtual reality broadcast will be available through Fox’s free Fox Sports VR app, which displays 360 video that requires no special equipment as well as an immersive version for use with a Google Cardboard or Samsung Gear VR headset, which is powered by Facebook’s Oculus technology.

Of course, there’s the social VR experience, which can be turned on and off allows fans to connect and watch a game in a virtual “suite” with their Facebook friends. And for this game, Fox Sports is adding another layer to its virtual reality sports technology, giving fans a full panoramic view with access to a 360-degree Skycam. The Skycam livestream viewed on the FOX Sports VR app, @CFBonFOX on Twitter, FOX College Football (CFBonFOX) on Facebook and the FOX Sports YouTube channel, with multi-view, live game action available on the app.

“This game will showcase a full feature set that has never been seen before,” Jeb Terry, Fox Sports’ VP Partner & Program Management, told TheWrap. “Every event is an opportunity to add new features, push the tech forward, and learn how fans want to interact with the cameras, the tech, and with each other.”

Rudy Ruettiger had to bust his tail for years just to get on the field at Notre Dame Stadium for a few plays. Social VR makes that journey a lot quicker.

“While not every Spartan or Fighting Irish fan will be able to make it to the game with their friends, we want to provide the next best solution,” Terry said.