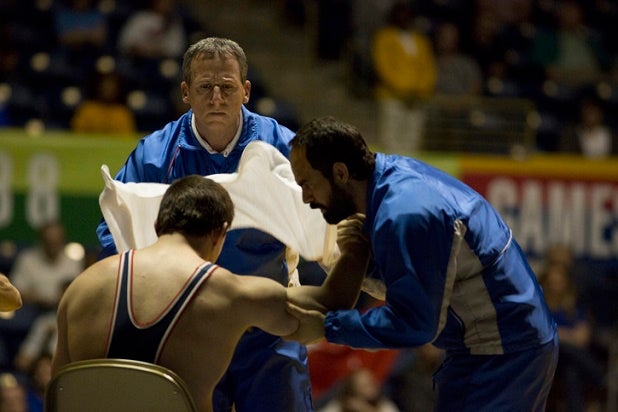 “Foxcatcher” is the latest awards hopeful to make a splash in its debut at the specialty box office.

The Fox Searchlight drama starring Steve Carell, Channing Tatum and Mark Ruffalo opened in six theaters and brought in $288,113 this weekend for an impressive $48,019 per-screen average.

That’s the fourth-best limited opening of the year, behind “The Grand Budapest Hotel,” “Boyhood” and “Birdman,” and a little ahead of last weekend’s opening of Focus Features’ film about Stephen Hawking, “The Theory of Everything.” The romance starring Eddie Redmayne and Felicity Jones averaged $41,000 on five screens in its debut.

“Foxcatcher,” is based on the story of Olympic wrestling champ Mark Schultz and his paranoid-schizophrenic billionaire coach John Du Pont, who murdered Schultz’s brother in 1996.

That’s an OK $3,235 per-screen average for the fact-based drama starring Gael García Bernal as Maziar Bahari, a London-based Iranian-Canadian journalist who was held in Iran for 118 days because of an interview he gave regarding the country’s presidential election.

Sony Pictures Classics expanded “Whiplash,” which stars Miles Teller as a music student dealing with an abusive drumming coach (J.K.Simmons), from 88 to 419 theaters and it brought in $801,000. That’s a $1,912 per-screen average for the drama written and directed by Damien Chazelle.