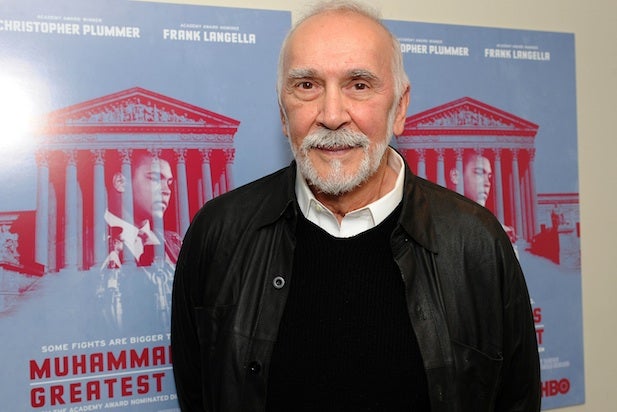 Tony Award-winning actor Frank Langella has signed with Paradigm, according to an individual close to the actor. Langella joins the agency from ICM Partners, where he had been a client since 2010.

The Syracuse graduate has been acting for more than four decades, starting his career in off-Broadway theater. He earned his first Tony in 1975 for Edward Albee’s “Seascape,” and by that point he was already alternating between film, television and theater.

Langella has acted in movies directed by Mel Brooks and Ron Howard, appeared on-screen alongside Laurence Olivier and Anthony Hopkins and embraced Shakespeare on several occasions.

His best-received role in recent years blended these two worlds, as he played Richard Nixon in the play “Frost/Nixon” and then reprised the role in a movie adaption that earned him an Oscar nomination.

Langella has been exercising his deep voice quite a bit in recent years, appearing in “Muppets Most Wanted,” “Draft Day,” “Noah” and Stephen Frears‘ Muhammad Ali movie. Langella can next be seen in “Grace of Monaco,” Olivier Dahan’s film about Grace Kelly starring Nicole Kidman.

Here’s what Langella told Esquire two years ago about his approach to picking roles:

“I know a couple of actors of my generation who don’t even read scripts. Their attitude is ‘They want me? I’m going.’ My approach was always to say ‘no’ more than ‘yes.’ At this point in my career, I can stand shoulder to shoulder with an actor my age who has chosen to do really awful things, and he will get a job over me. And I can stand shoulder to shoulder with an actor who’s been tremendously esoteric, and he can’t get anywhere. I fall in some strange category. I’ve gone my own route. I don’t believe in regrets, but I would’ve said yes a little more than I did. I think I’m working more in this decade than I ever have.”