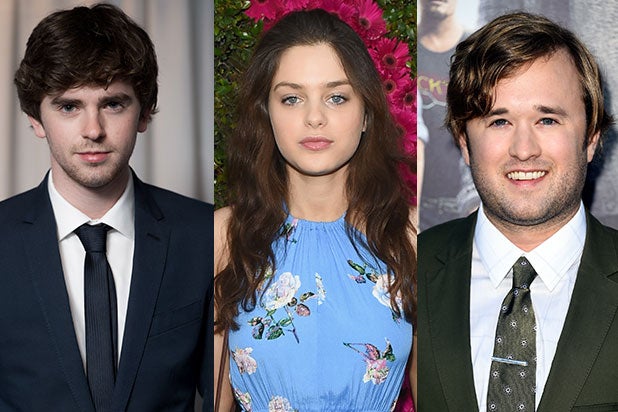 The film follows Charlie Brenner (Highmore), who in his mid-twenties but still lives at home with his mother and stepfather. Having no sign of motivation or structure in his life, he falls for a girl called Amber (Rush), who already has a serious boyfriend. However, Amber and Charlie become close, and the grey zone between friendship and love is blurred.

“I could not be more excited about the cast we’ve been able to put together,” director Jake Goldberger said on Tuesday. “Watching it come to life with these incredible actors is nothing less than a dream come true.”

Also Read: 'Bates Motel's' Freddie Highmore Admits His Mom-Cuddling Character Is 'a Bit of a Perv'

Goldberger also wrote the screenplay for the comedy being produced by Alex Ginzburg and Tony Lee for Let it Play, and Jim Young for Animus Films.  Production is currently underway in Mobile, Alabama.

Highmore is best known for his role as young Norman Bates on A&E’s “Bates Motel.” He is currently filming the TV mini-series “Close to the Enemy,” and will be voicing a character in “The Canterville Ghost.”

Rush’s credits include “The Giver” and horror flick “We Are What We Are.” She’ll be back on the big screen in October when “Goosebumps” hits theaters and will star alongside Sam Worthington in “Hunter’s Prayer.”

Osment, best known for his Oscar-nominated performance in “The Sixth Sense,” was recently seen in Warner Bros. “Entourage” movie, as well as IFC’s comedic miniseries “The Spoils Before Dying.”

Volk can be seen in MTV’s “Faking It;” Abel is known for his roles in the “Percy Jackson” series; and Smith recently starred in “Insidious: Chapter 3.”