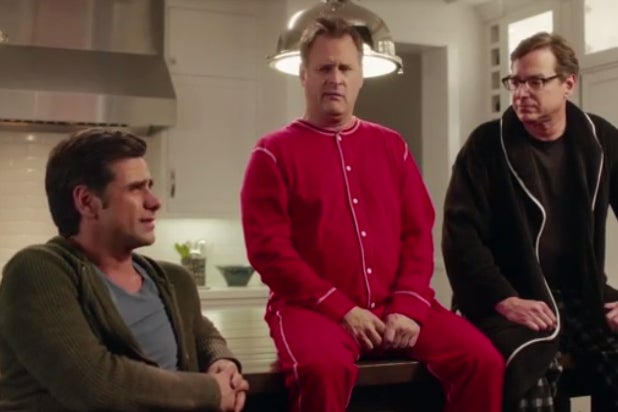 John Stamos has reunited with his former “Full House” friends for a Dannon Oikos Super Bowl commercial that proves how close the three men remain 19 years after the family sitcom left the airwaves.

In the 32-second teaser to the actual Super Bowl XLVIII ad, Stamos is seated — apparently alone — in his kitchen, enjoying some quality Greek yogurt and watching the game.

He clicks off the TV, spins around to face his one-time TV brother-in-law Bob Saget and San Francisco basement-dwelling pal Dave Coulier, who are seated on his kitchen counter.

“Whaddya say boys? Time to go to bed?” Stamos poses to Coulier, who is wearing a onesie, and Saget, donning a bathrobe.

“Don’t you think it’s time we all get our own places?” Saget retorts.

A beat passes before all three spontaneously reply, “Nahhh.”

The next 15 seconds of the tease zoom in on the Super Bowl XLVIII date, Feb. 2, and a website where “Full House” fans can get more of these three amigos. On the site, viewers can find additional videos of Coulier taking on Stamos (kind of) in air hockey, and another where the comedian tells a “nice clean joke,” among others.