Audrina Patridge looked ready to step in to the pit crew for NASCAR star Jeff Gordon’s blue “Pepsi” car during a party pit stop in Hollywood on Wednesday night. The 24 year old starlet saddled up next to the NASCAR champ’s “#24 Chevrolet” sporting his team colors perfectly. (Picture below courtesy of Alex Wyman/Wireimage ). Crash and smash professional Jill Wagner (host of ABC’s “Wipeout”) and Melissa Joan Hart hit the Auto Club Speedway’s celebration of this weekend’s Pepsi 500race.Beyond Gordon, the sport’s other most marketable driver — Dale Earnhardt Jr. — also drove the 58 mile bonus lap west from the speedway in Fontana to continue auto racing’s attempt to dent our Laker (and currently Dodger) focused industry. 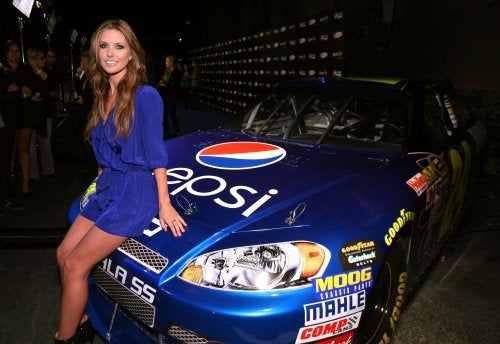 While some of the crowd didn’t recognize performer Jessie James until she sang her hit single, some diehard fans spread the word amongst party goers: “She’s the next Taylor Swift." Those outside earshot will have to wait until she wins an award with Kanye West in the audience. Actor Balthazar Getty’s band Ringside followed up with no introductions necessary.
Slash and George Lopez surprised Dodger fans Thursday afternoon by headlining the pre-game festivities at Dodger Stadium (picture below courtesy of Getty Images). Before Lopez’s first pitch, the guitar hero’s national anthem set the tone for an amazing afternoon in Chavez Ravine in the Game 2 of their playoff series against the St. Louis Cardinals. (The Dodgers came-from-behind to win with two outs.) 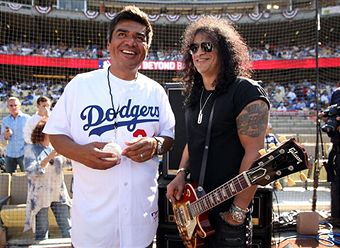 Former slugger Jose Canseco was out of sight at the diamond, but still out on the town at singer Mya’s surprise birthday party at Coco De Ville on Tuesday night. Pals Brittany Snow, Lance Bass andUFC fighter-turned ABC Dancer Chuck Liddell dodged a giant ice cream cake “tower” that staff maneuvered to the star’s table before it melted under a shower of sparklers (in lieu of candles).
The main event birthday party of the week? Simon Cowell’s 50th bash in rural England. The party, which fellow televised dream crushers Randy Jackson, David Hasselhoff, and Gordon Ramsay showed up to on Saturday night, reportedly didn’t end until the $800 bottles of Cristal ran out at 5 Sunday morning. Despite 385 invited guests, Cowell voted current American Idol Kris Allen down to his personal “bottom two” putting him in place 386 and leaving him off the list. The soft spoken singer called out his new boss to radio personality Valentine on LA’s 104.3 MY FM this week with the ultimate kicker: “I was in London the night of the party”. 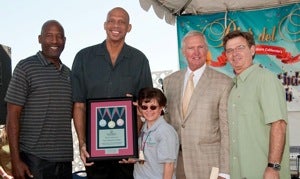 Closer to home in L.A., Special Olympics Southern California’s honorary chair Maria Shriver was more inclusive. The First lady brought out the tall ( Laker legends James Worthy, Kareem Abdul-Jabbar, and Jerry West; photo by Michael Pliskin) and short (The “half” in “Two and Half Men” — Angus T. Jones) for the org’s 40th anniversary party at the Santa Monica pier on Sunday.
Meanwhile up the PCH 15 miles, Breast Cancer Awareness month continued to bring out the faces as Thomas Calabro and Shannon Tweed spent their Sunday at “Cure in the Canyons III” at the Four Seasons in Westlake.