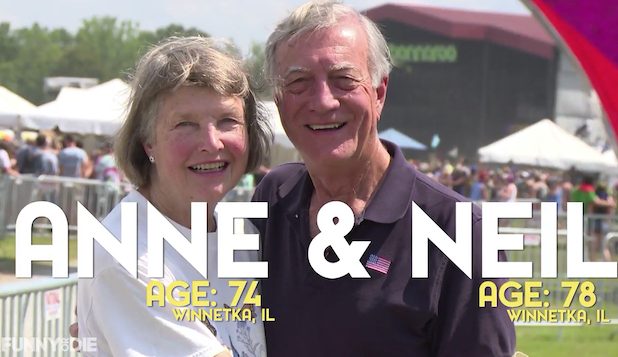 Funny or Die sent four senior citizens to Bonnaroo Music and Arts Festival and the results were predictably hilarious, as the group danced, declined flash tattoos and smelled some good old “Mary Jane.”

“I’m still alive and standing to tell the tale,” said Isolde, who also speaks German with Jack Antonoff of Bleachers. By the end of the trip, she’s asking for a Miracle Ear because she can’t hear.

Meanwhile, Mumford & Sons called Anne and Neil’s granddaughter and described the couple as “very cheeky people.” Anne is a Kenny G fan who doesn’t care for rap music because she doesn’t like the lyrics.

Jon Mackey directed the video, which was produced by Dan Bernstein and executive produced by Ben Sheehan. The video has amassed 37,000 views as of this writing.

Old People At Bonnaroo from Funny Or Die