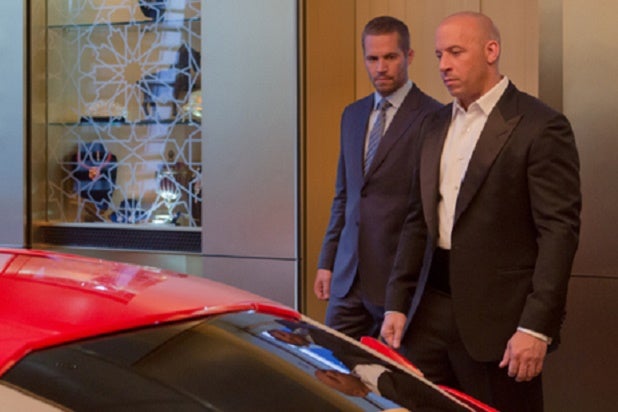 “Furious 7” roared off the line with a franchise-best $15.8 million at the box office in early Thursday night showings.

The haul from screenings that began at 7 p.m. in 3,069 theaters is Universal’s best ever and blows the doors off the the $6.5 million taken in by “Fast and Furious 6” on its way to $97 million opening that drove a Memorial Day weekend record in 2013.

It’s also well ahead of the $10.2 million rung up by “Captain America: The Winter Soldier,” which set the record for an April opening at this time last year with $95 million, and the $8.6 million taken in by “Fifty Shades of Grey,” which currently ranks as 2015’s top opener after its $86 million Presidents Day weekend debut.

Also Read: 9 Jaw-Dropping Movie Stunts That Made Us Shout at the Screen (Photos)

The highly anticipated hot car sequel is heading for more than $115 million over the weekend say industry analysts, which would top both of those marks. And the $2.2 million generated in IMAX theaters by “Furious 7” is the third-highest Thursday night gross ever, behind only “The Dark Knight Rises” and “Iron Man 3.”

With the other studios steering clear, “Furious 7” will have the marketplace largely to itself as it rolls into a saturation-level 4,004 theaters Friday. It is also debuting in more than 63 overseas markets, and took in nearly $17 million in its first day of release abroad, the studio reported.

Vin Diesel, Dwayne Johnson, Michelle Rodriguez and newcomer Jason Statham top the multi-ethnic ensemble cast and James Wan has taken over as director of “Furious 7,” but it is the presence of the late Paul Walker that has kicked excitement into overdrive for many fans.

Walker’s death along with his friend Roger Rodas in a fiery auto crash in November 2013 forced UniversaL to postpone the film’s rollout, originally set for last July. The studio needed time to replace the 40-year-old star — CGI images and brothers Cody and Caleb will stand in — who appeared as cop-turned-street racer Brian O’Conner in all but one of the six previous “Fast and Furious” films.

Djimon Hounsou and Kurt Russell are also new faces in the “Furious 7” cast, which includes returnees Jordana Brewster, Tyrese Gibson, Chris ‘Ludacris’ Bridges and Lucas Black. Chris Morgan wrote the script, as he has for every film in the series.

Neil Moritz, Legendary Pictures chief executive Thomas Tull and Diesel are the producers of “Furious 7,” which has the biggest production budget of any film in the series at $190 million.