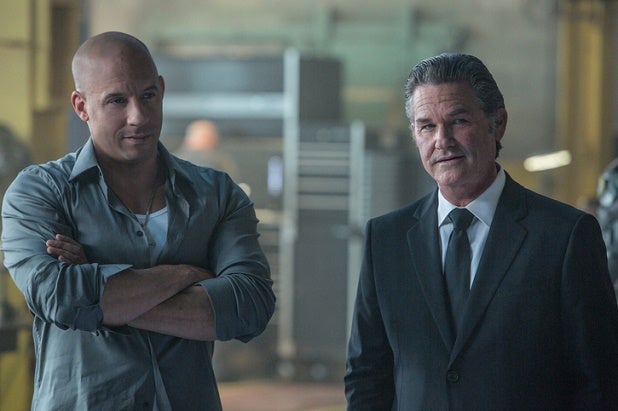 The blockbuster “Furious 7” put the Scott Eastwood-Britt Robertson romance “The Longest Ride” in the rear view mirror with an $18.8 million Friday that assured a second straight weekend win at the box office.

Fox’s Nicholas Sparks adaptation was the weekend’s only wide-opening film and no match for Universal’s “Furious 7,” which is heading for $60 million over the three days. “The Longest Ride” took in $5.5 million Friday and so did DreamWorks Animation’s “Home,” which is also distributed by Fox.

The family film will do better when the minivan crowd turns out Saturday and Sunday and should have a $25 million third weekend, while “The Longest Ride” will finish at roughly $14 million in its debut. First-night audiences liked it better than the critics and gave it an “A” CinemaScore; it’s at 29 percent positive on Rotten Tomatoes.

“Furious 7” is still in more than 4,000 theaters and remains in high gear, even though it will drop around 70 percent from last weekend’s $147 million domestic debut, the year’s best and the highest ever in April.

The action sequel directed by James Wan has crossed $200 million at the domestic box office in just eight days, faster than any Universal movie ever has — “Despicable Me 2” took 11 days in 2013 — and should be at $250 million by Sunday.

The PG-13-rated “Furious 7” stars Vin Diesel, Dwayne Johnson, Michelle Rodriguez and the late Paul Walker and is on course to be 2015’s first movie to hit $1 billion at the worldwide box office. With $317 million from abroad, it has grossed more than $500 million globally in just over a week and it opens in China and Russia this weekend.

The Weinstein Company expanded “Woman in Gold” from 258 theaters to 1,504 theaters in its second week. The Helen Mirren-Ryan Reynolds drama set in the art world took in $1.8 million and is heading for $6 million over the three days, which should be good for seventh place. Katie Holmes, Daniel Bruhl and Jonathan Pryce co-star in “Woman in Gold,” directed by Simon Curtis.

The R-rated comedy “Get Hard,” Disney’s “Cinderella” and “The Divergent Series: Insurgent” took the fourth through sixth spots, and all are looking at about $7 million for the weekend.

Overall, the box office was running about even with the same weekend last year when “Captain America: The Winter Soldier” led the way with a $41 million second weekend. For the year, 2015 is nearly 7 percent ahead of 2014 and the domestic box office is on pace to top $11 billion and be the biggest in history.