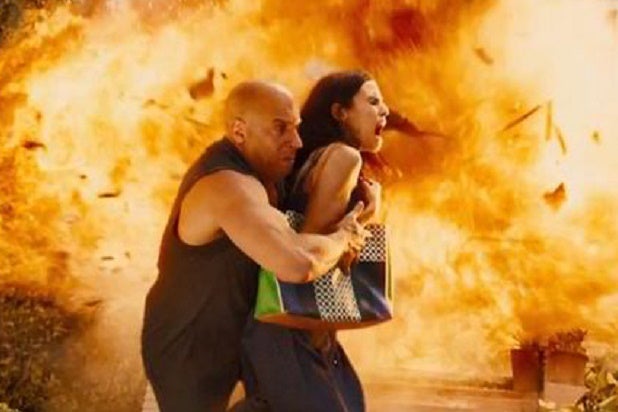 “Furious 7,” Universal’s blockbuster hot car sequel, capped its record-breaking run with a fourth consecutive triumph at the box office this weekend. And in the process, it moved past “Frozen” to become the fifth-highest grossing film globally ever.

Lionsgate’s “The Age of Adaline,” a fantasy romance starring Blake Lively and “Game of Thrones” actor Michiel Huisman, opened with $13.3 million and on Friday even finished on top, ahead of “Furious 7.” But the action sequel had a big Saturday that powered an $18.3 million weekend and made it the first movie since 2012’s “The Hunger Games” to stay on top of the box office for a month.

Sony’s comedy “Paul Blart: Mall Cop 2” got a boost from the family crowd on Saturday too, and wound up in second with $15.5 million. That’s just a 35 percent drop from its opening weekend, and raised the domestic total of the Kevin James comedy to $43 million, well over its $30 million production budget.

The weekend’s other wide opener, the faith-based drama “Little Boy,” opened out of the top ten with $2.6 million for Open Road Films.

“Ex Machina,” a British sci-fi fantasy, took in $5.3 million to finish a surprising sixth in its nationwide expansion. Distributor A24 aggressively went wide with the film, written and directed by Alex Garland and starring Oscar Isaac, going from 39 locations to 1,255 theaters in its third weekend and it paid off.

Before “Furious 7” opened in the U.S. on April 3, Vin Diesel, Dwayne Johnson, Michelle Rodriguez and the rest of the cast dedicated the film to Paul Walker, the 40-year-old former cast member they called their “brother,” who was killed in a fiery car crash while it was shooting in November of 2013.

The James Wan-directed action sequel is the highest-grossing Universal film of all time, having taken in more than $320 million domestically and $1.32 billion worldwide. It sped past the $1 billion worldwide mark in just 17 days, faster than any film in history. This weekend it overtook “Frozen” to become No. 5 on the list of highest-grossing films ever and passed the $1 billion mark in overseas returns alone.

Once in doubt, an eighth “Fast and Furious” movie has been set for 2017 and added to the franchise, which has grossed more than $3.6 billion since launching in 2001.

“Age of Adaline” audiences were a whopping 75 percent female and 58 percent over the age of 25, so Lionsgate’s marketing team hit the mark with its target demographic. Moviegoers awarded an “A-” Cinemascore to the Lee Toland Krieger-directed sci-fi romance, which centers on a woman who never ages past 29 years. Ellen Burstyn and Harrison Ford co-star in “Age of Adaline.”  That strong CinemaScore should boost word of mouth, key to the long-term playability vital to its financial success.

DreamWorks Animation’s kids film “Home” continued to play steadily in its fifth week and finished in fourth with $8.3 million, which brought its domestic haul up to $153 million for distributor Fox.

The Disneynature documentary “Monkey Kingdom” was ninth with $3.6 million in its second week. And the Weinstein Company’s “Woman in Gold” rounded out the top ten with $3.5 million. The Helen Mirren drama is up to $21.6 million domestically after four weeks.

The overall weekend was off around 15 percent from last year’s comparable frame, when “The Other Woman” opened at No. 1 with $24 million. Some of the drop off can be attributed to consumers saving their movie money until next weekend, when Disney and Marvel will kick off the summer with “Avengers: The Age of Ultron.”