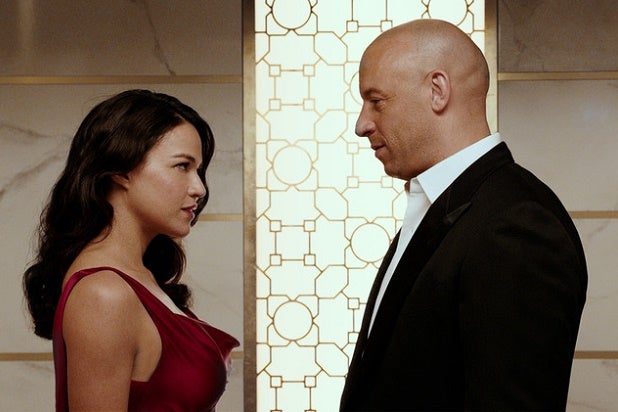 Only two other films, both from James Cameron, have managed the feat before, “Avatar” and “Titanic.”

On Sunday, Universal reported a $93 million second weekend in China that swelled its total there after eight days to $250.5 million. That puts it behind only “Transformers: Age of Extinction,” which took in $301 million last year, as the top-grossing film ever in that country.

The action epic starring Vin Diesel and Dwayne Johnson also opened at No. 1 in Japan, its final foreign territory, with a franchise-best $6 million. In all, the weekend raised the total from overseas for “Furious 7’ to $858.3 million. Combined with its $294 million domestic haul, its worldwide total is now $1.15 billion, seventh-highest among all films. Seventy-four percent of the global haul for “Furious 7” has come from abroad.

The blockbuster hot cars sequel on Friday crossed $1 billion in grosses at the worldwide box office – which includes both foreign and domestic returns – in its 17th day of release, faster than any other film has.

Meanwhile, Disney’s “Cinderella” has now crossed $450 million globally, with an estimated overseas total of $457 million. The fairy tale update brought in $11.3 million this weekend, including a strong hold in Australia where its total has passed another live-action Disney fairy tale, “Maleficent.” “Cinderella” opens in Japan, its final overseas market, next weekend.