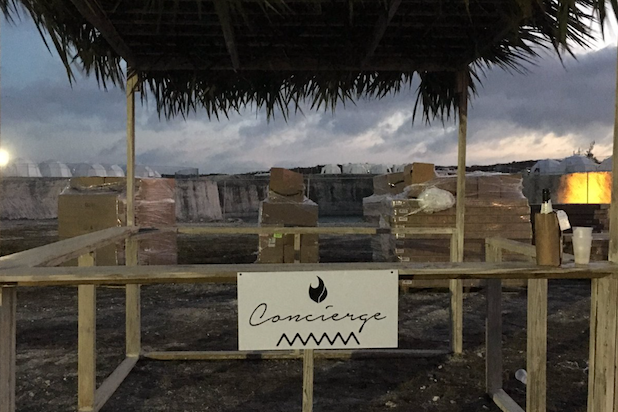 Billy McFarland, the organizer of the failed Fyre Festival that left hundreds of would-be partiers stuck in the Bahamas with cheese sandwiches, disaster tents and no music, was arrested Friday in New York on charges of wire fraud.

According to a statement from the U.S. Attorney’s office in the Southern District of New York, McFarland is accused of defrauding at least two individuals to invest about $1.2 million in Fyre Festival parent company Fyre Media, using false documentation about the company’s financial situation. McFarland allegedly told investors that Fyre Media had raked in millions of dollars by booking thousands of artists between July 2016 and April 2017, while the company had actually earned less than $60,000 through 60 bookings. The Department of Justice also accused McFarland of presenting doctored brokerage statements showing that he owned $2.5 million in shares of a certain stock to prove to an investor he could personally guarantee a loan, when he actually owned about $1,500 worth.

McFarland is scheduled to see a magistrate Saturday. He faces a sentence of up to 20 years in prison.

The first-annual Fyre Festival, scheduled to be held this April in the Bahamas, promised A-list models like Kendall Jenner and Bella Hadid and music from the likes of Migos and Blink-182. Instead, guests who spent upwards of $12,000 hoping to cavort with Instagram models on a “private island” as part of a Coachella-on-the-beach expereince ended up in bare-bones tents with cheese sandwiches near a Sandals resort. Rapper Ja Rule, one of the festival’s organizers, was compelled to apologize for the sham on Twitter.

“As alleged, William McFarland promised a ‘life changing’ music festival but in actuality delivered a disaster,”Acting Manhattan U.S. Attorney Joon Kim said in the statement. “McFarland allegedly presented fake documents to induce investors to put over a million dollars into his company and the fiasco called the Fyre Festival. Thanks to the investigative efforts of the FBI, McFarland will now have to answer for his crimes.”

“Under McFarland’s direction, Fyre Media created a promoter’s marketplace for entertainment bidding,” FBI Assistant Director-in-Charge William F. Sweeney Jr. said in the statement. “In addition to this initial business venture, McFarland went one step further in establishing a subsidiary of the company, Fyre Festival LLC. But in order to drive the success of both entities, as alleged, McFarland truly put on a show, misrepresenting the financial status of his businesses in order to rake in lucrative investment deals. In the end, the very public failure of the Fyre Festival signaled that something just wasn’t right, as we allege in detail today.”