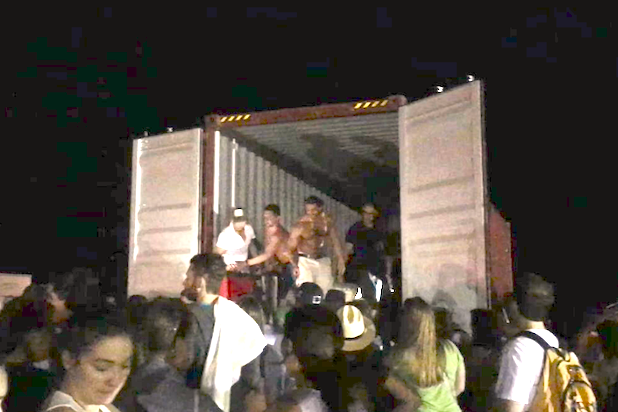 A day after the epic disaster known as the Fyre Festival got some scathing press, the organizers are trying to offer an explanation and apology for the now-canceled event.

It was touted as a luxury music festival, with some VIP packages on sale for up to $250,000 and other packages including a private yacht. Entrepreneur and Fyre Festival co-creator Billy McFarland spoke up late Friday after the festival bore the brunt of some intense scrutiny.

McFarland offered a full explanation of what went wrong, in his own words:

“Today was a very challenging day for all of us. But we would like to fully explain what happened.

“Billy McFarland and Ja Rule started a partnership over a mutual interest in technology, the ocean, and rap music. This unique combination of interests led them to the idea that, through their combined passions, they could create a new type of music festival and experience on a remote island.

“They simply weren’t ready for what happened next, or how big this thing would get. They started by making a website and launching a viral campaign. Ja helped book talent, and they had hundreds of local Bahamians join in the effort. Suddenly, they found themselves transforming a small island and trying to build a festival. Thousands of people wanted to come. They were excited, but then the roadblocks started popping up.

“As amazing as the islands are, the infrastructure for a festival of this magnitude needed to be built from the ground up. So, we decided to literally attempt to build a city. We set up water and waste management, brought an ambulance from New York, and chartered 737 planes to shuttle our guests via 12 flights a day from Miami. We thought we were ready, but then everyone arrived.

“The team was overwhelmed. The airport was jam-packed. The buses couldn’t handle the load. And the wind from rough weather took down half of the tents on the morning our guests were scheduled to arrive. This is an unacceptable guest experience and the Fyre team takes full responsibility for the issues that occurred.

“Everyone was very concerned for our guests. They needed a place to sleep and everyone did their absolute best to rebuild. We took everyone to the beach and built as many tents and beds as fast as possible, but as more guests arrived, we were simply in over our heads. Ultimately, we didn’t think security could keep up, so we had to postpone the festival. The response to the postponement was immediate and intense. We had no other options this morning, so we began the process of getting guests quickly and safely back to Miami, which continues now. Our top priority as a company is to ensure the comfort and safe return home of all of our guests.

“Then something amazing happened: venues, bands, and people started contacting us and said they’d do anything to make this festival a reality and how they wanted to help. The support from the musical community has been overwhelming and we couldn’t be more humbled or inspired by this experience. People were rooting for us after the worst day we’ve ever had as a company. After speaking with our potential partners, we have decided to add more seasoned event experts to the 2018 Fyre Festival, which will take place at a United States beach venue.

“All festival-goers this year will be refunded in full. We will be working on refunds over the next few days and will be in touch directly with guests with more details. Also, all guests from this year will have free VIP passes to next year’s festival.

“We’re grateful for the Bahamian Government and The Bahamas Ministry of Tourism for their assistance during this challenging time — their efforts have been exemplary. We want to thank the people of the Bahamas for their support and for graciously allowing us the privilege of visiting their islands. We apologize for any inconvenience the past 24 hours has caused and we look forward to making a considerable donation to the Bahamas Red Cross Society as part of our initiatives. We need to make this right. And once we make this right, then we will put on the dream festival we sought to have since the inception of Fyre.

“Thank you for all your continued patience and understanding. We apologize for what all of our guests and staff went through over the last 24 hours and will work tirelessly to make this right.”