In 2003, Gabrielle Union was convinced she was on her way to becoming the next big female action star.

She had released both “Bad Boys II,” a follow up to the Will Smith and Martin Lawrence franchise that grossed almost $280 million worldwide, and the Jet Li-DMX genre thriller “Cradle 2 The Grave.”

Indeed, her credits in the subsequent years were romantic leads. There were also a few indie pit stops (Ryan Murphy’s “Running With Scissors,” John Slattery’s “In Our Nature,” Nate Parker’s derailed “The Birth of a Nation”) and a curveball character emulating a “Real Housewives”-esque reality star in Chris Rock’s “Top Five.”

But she wasn’t Lara Croft or Sigourney Weaver. So 15 years later, Union is taking matters into her own hands and betting on herself as a producer and star in “Breaking In,” which debuts today. The film about a mom trying to save her kids arrives just in time for Mother’s Day Weekend.

“I’ve been trying to get back into action for so long, and I mentioned that to Will Packer,” said Union, who reteams with Packer on the home-invasion thriller from director James McTeigue and Universal Pictures.

“This is now our third project together. I brought him on to ‘Being Mary Jane’ as an executive producer, and he brought me on to ‘Almost Christmas,'” Union said of her successful and critically-praised BET drama and Packer’s 2016 holiday comedy.

“We have a shorthand. We can have an entire conversation from across the room without saying a word. So we did our best to try to bring as much magic to the project as possible,” she said.

But “Breaking In,” budgeted at $6 million, isn’t about magic. It’s about blood, sweat, revenge and never underestimatong a pissed-off mom. 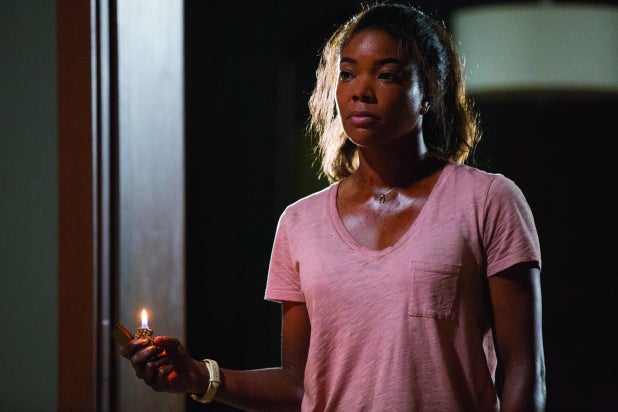 Union stars as Shaun, off to Lake Michigan to prepare her estranged father’s massive house for sale after his death. With her own two kids in tow, Shaun doesn’t spend much time lamenting the past. She wants the estate off her hands.

The problem is, a group of robbers led by Billy Burke (“The Twilight Saga”) are anxious to rob it before a For Sale sign goes up. Another stressful element — Shaun’s late father was involved in some sketchy financial dealings, and outfitted his home with futuristic security shields and state-of-the-art surveillance. She’s caught outside when the robbers bust in and lock her out while holding the kids hostage — thus, the title.

Union’s performance is confident and understated, even in her character’s most desperate moments. She’s equally confident as a producer — a role she’s been playing forever, she notes, without the compensation or title.

“As talent, our time gets wasted. And, on the production side, people feel like, ‘We paid you. That’s what Hollywood is — hurry up and wait,” said Union.

“When you realize there is a better and more efficient way to do things that also save you money, while not wasting your talent’s time? Let’s figure out how to do that.”

As an executive producer on “Being Mary Jane,” Union don’t sit quietly when her time and money were on the line.

“I became an unofficial call sheet consultant during ‘Being Mary Jane’ — like, ‘See here where you’ve brought me in about three hours early? We’re going to go ahead and take that out, and if you don’t like it we can speak to the executive producer.’ Oh, that’s me!” she said.

Acknowledging the reality of the “Breaking In” budget — which is on track to more than double its cost at the box office this weekend — Union said respect was key to making the best movie within their means.

“When your’e calling in favors and you don’t have a big budget and people aren’t making a ton of money, we have to respect their time. Because when they do get to set, they’re annoyed. And you’re not going to get the performance that you want,” she said.

The actress-producer will not limit her renewed action ambitions to the big screen. Thanks to her long relationship with “Bad Boys” producer Jerry Bruckheimer, Union conceived a female reboot of the Smith-Lawrence film as the pilot “L.A.’s Finest” at NBC.

She also recruited Jessica Alba to star opposite her — no easy task given Alba had given birth 72 hours prior to Union’s phone call.

“My first order of business as an executive producer was, how do I convince a woman that runs a billion dollar company who had just given birth to her third human being, like, three days ago, that in all of her spare time … she would also want to come star in and co-executive produce with me?” Union said.

In a Hollywood culture rife with trauma, abuse and exclusion, Union and Alba made no bones about what kind of workplace they wanted.

“It’s been an amazing process. And luckily it was just understood that we were going to have a very inclusive set and a family-friendly set. We’re not going to shame a woman for needing to breastfeed. It is what it is,” Union said.

“The show is so good, and hopefully NBC agrees with us,” she concluded.

Heed the tagline for “Breaking In”: Payback is a mother.