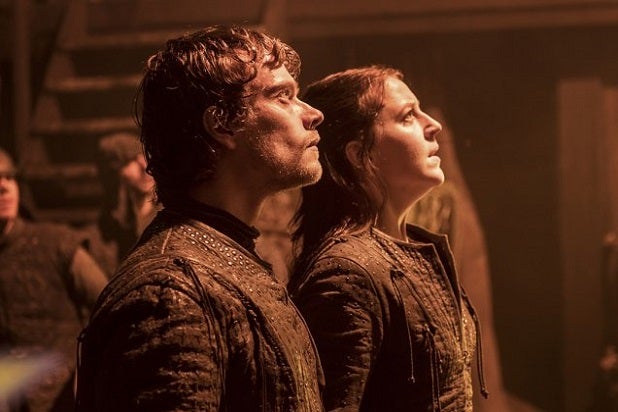 The second season of “Game of Thrones” Season 7 angled to be more preparation for the big moments coming later in the season — and ended with flaming ships and Daenerys’ allies running into some serious problems.

“Stormborn” started aptly amidst a storm at Dragonstone, the new home base (and ancestral home) for Daenerys in Westeros. There, Dany gets some important advice from Tyrion. Sure, she could attack King’s Landing immediately, but it would result in thousands of deaths.

“Conquering Westeros would be easy for you, but you’re not here to be queen of the ashes,” Tyrion told her.

As the council wore on, Dany finally called out Varys for his years of double-dealing, spying for King Robert but helping Daenerys and her brother, Viserys, evade death and capture. Questioned about his actions, Varys explained that his loyalty is with the people of the realm, not its rulers. He thought a Targaryen would be a better alternative to Robert, just like Robert was a better alternative to the mad king.

Dany convinced Varys to pledge that if she was ever failing her people, he would tell her how, instead of conspiring against her. In return, Dany pledged in return that if Varys every betrayed her, she’d burn him alive.

“I expect nothing less from the Mother of Dragons,” Varys said.

Also Read: 'Game of Thrones': How Many Freys Were in the Season 7 Premiere Cold Open?

The Red Woman, Melisandre, showed up right afterward. We learned an important bit of information from that meeting: the prophecy of the Prince Who Was Promised has been slightly mistranslated. Turns out, the noun for “prince” actually has no gender, which means Dany could be the person the prophecy says will be essential to stopping the Night King.

Melisandre also mentioned Jon Snow, who she also believes is key to the battle against the Night King. Tyrion vouched for the King in the North, so Dany ordered for Jon to be summoned to Dragonstone to talk — “and bend the knee.”

Next, at Winterfell, Jon and Sansa received Tyrion’s raven, and Jon finally asked Sansa her advice, deferring to her judgment of Tyrion in deciding whether to go to Dragonstone. Sansa tells Jon the whole thing is too risky, and he seems to agree with her.

In King’s Landing, Cersei looked to consolidate her power by invoking fear in the Tyrells’ bannermen against Daenerys. She ran the class warfare angle, reminding the lords how Dany had killed nobles (read: slavers) in Essos, and mentioning that Daenerys brought the “savage” Dothraki across the Narrow Sea to Westeros.

Among those lords was Randyll Tarly, Samwell’s dad. Jaime asked him to be the ranking general in his army, citing the fact that Randyll was the only strategist to defeat Robert Baratheon during Robert’s Rebellion. Randyll refused for a bit, but it seems like he might be willing to ally with the Lannisters out of his sense of honor.

Over in Oldtown, we caught up with Sam, Archmaester Marwyn, and Jorah Mormont. Most of Jorah’s body is covered in greyscale at this point, and Marwyn said the progression is so far gone, it’s incurable. While Jorah won’t die from the disease for a while, Marwyn said he only has six months or less before the disease drives him mad.

Also Read: 'Game of Thrones': Who Is the Man Stuck in That Oldtown Cell?

Marwyn suggested that Jorah kill himself, but Sam was taken aback when he found out the knight’s last name. Sam recognized Jorah as the son of Jeor Mormont, the Lord Commander of the Night’s Watch.

Back at King’s Landing, Cersei consulted with Qyburn to figure out a way to kill Daenerys’ dragons. He showed her a huge ballista, a siege-scale crossbow, that Qyburn thinks can take down a dragon, noting how Drogon was wounded by spears in the Meereen fighting pits.

More war council happened in Dragonstone, where Dornish leader Ellaria Sand and Yara Greyjoy suggested that Dany should go ahead and attack King’s Landing immediately. She pushed them off, as Tyrion had advised. “I’m not here to be queen of the ashes,” Dany told them — quoting Tyrion.

Instead, Tyrion laid out Dany’s master plan: Use the Dornish and Tyrell armies to besiege King’s Landing, cutting off its supplies and killing Cersei’s narrative that Daenerys is taking over Westeros with a foreign horde. Meanwhile, the Unsullied will sail for the Lannisters’ home of Casterly Rock — the true seat of power in Westeros.

After the council, Dany met privately with Lady Olenna, the last of the Tyrells. She suggested she not always listen to everything Tyrion, or anyone else, tells her.

“I’ve known many clever men. I’ve outlived them all. You know why?” Olenna asked. “I’ve ignored them.”

Also Read: Every Important Dead 'Game of Thrones' Character You Forgot About (Photos)

Leaving the war council, Missandei brought the news to Grey Worm that he’d be shipping off the Casterly Rock soon. Finally, Grey Worm told Missandei how he felt about her, explaining that while he’s always been fearless, the only thing that makes him afraid is Missandei. Then they finally got it on, releasing some sexual tension that’s been building for what seems like forever.

Back at Oldtown, Sam has a plan for treating Jorah’s greyscale. He read of a case cured by a maester, who the archmaester revealed actually died of greyscale. The procedure is apparently too dangerous, and thus forbidden for Sam — but he goes to Jorah in the night to try to ure him anyway.

The treatment is to, basically, skin the grayscale off Jorah. And it was pretty gross and pussy. In Season 7, Sam gets all the grossest moments.

We caught up to Arya next, who made her way back at the Inn at the Crossroads on her way to King’s Landing. That’s where she previously left her baker friend, Hot Pie, who is there still! During their conversation (which, with Hot Pie, always turns to food), Arya mentions how she’s been making “one or two” pies. She doesn’t mention what the secret ingredient in them was.

After Arya’s experiences in Braavos, meeting Hot Pie added to her scene last episode that included a cameo by Grammy winner Ed Sheeran, reminding Arya that good people exist and she doesn’t have to be a heartless Terminator-like murderer all the time. Arya also learned a key bit of information: Hot Pie tells her Jon Snow is King in the North, so Arya once again sets off to find her family.

At Winterfell, Jon received another raven message. It’s Sam’s note from Oldtown, telling him about all the Dragonglass at Dragonstone. Together with Tyrion’s message, Jon now had a good reason to go to the meeting with Daenerys. Despite that, Sansa again challenged his kingly authority in front of all the lords. But Jon surprised her by saying that, while he’s gone, Sansa will be in charge. Does that make her Queen in the North? Warden of the North? It’s something, and Petyr “Littlefinger” Baelish seemed interested in Sansa’s newfound authority.

A quick conversation between Littlefinger and Jon in the crypt beneath Winterfell laid out where both men stand, though. Littlefinger said he loves Sansa. Jon told him to stay away from her. Surely there will be no further conflict here.

Back to Arya in the woods on her way north. As she was camping on her route, a group of wolves appeared — led by a huge direwolf. In fact, it was Nymeria, Arya’s direwolf that she chased off way back in Season 1. Arya tried to get Nymeria to come with her but Nymeria takes her wolfpack and goes. “That’s not you,” Arya said, echoing something she said in Season 1 when her father, Ned, spoke to her about the usual role for a girl. Nymeria isn’t a companion, just like Arya isn’t a traditional lady.

After all that interpersonal drama, the last season of the episode finally kicked off the war. It found Yara and the Greyjoy fleet sailing for Dorne. As Yara and Ellaria flirt in front of Theon, their ship is attacked — by their uncle, Euron Greyjoy, and the Iron Fleet.

Also Read: 'Game of Thrones': Why Arya Told Nymeria 'That's Not You'

The battle went pretty poorly, unfortunately. While Yara and Theon fought valiantly along with the Sand Snakes, Euron’s men couldn’t be stopped. Two of the Sand Snakes, Obara and Nymeria, died fighting Euron. Ellaria and Tyene, the youngest Sand Snake, were captured by the Ironborn.

But in the saddest moment of the episode, Euron managed to capture Yara, holding his axe to her throat and inviting Theon to try to save her. Unfortunately, Theon’s Ramsay Bolton-based PTSD comes back in a big way. He “Reeks” out, and rather than fight Euron, dives off the side of the ship to save himself.

Suddenly, it seems Daenerys’ advantage over Cersei has been cut significantly, and some key allies haven’t survived. The war has started, and it’s going to be a long one.