Video game enthusiasts spent roughly $400 on games and accessories since March, according to new data from LendingTree subsidiary Comparecards.

That’s about one-third of value of the $1,200 stimulus check that the government issued to some Americans in April to offset wage losses brought on by the coronavirus.

Comparecards surveyed roughly 1,000 Americans in June and found that 25% of gamers have upped their spending on gaming since the pandemic began. “Nearly 1 in 4 consumers are spending more on gaming now than they were prior to March 2020, when varied levels of stay-at-home orders were implemented across the country,” Comparecards reported.

28% of those surveyed spent money on boxed or digital video games within the last year. 25% of gamers said they spent money on in-app purchases — which includes expansion packs within a game, or in-game currency.

LendingTree chief credit analyst Matt Schulz told TheWrap a combination of in-home boredom and extra pandemic benefits is leading consumers of games to up their spending.

“It makes a lot of sense that people are spending more on gaming. People have a lot more spare time and some of them even have a little more money in their pockets than normal because of government stimulus checks and extra unemployment benefits,” said Schulz. “More spare time plus more money on hand equals a lot more gaming for a lot of folks.”

“It can be totally OK to spend a bit more than usual on your passions during these crazy times,” Schulz said. “Gaming is a major stress reliever for many, many people, and that’s a really important thing during the pandemic. When that spending gets dangerous is when you do it without any thought to your budget or to your debt.” 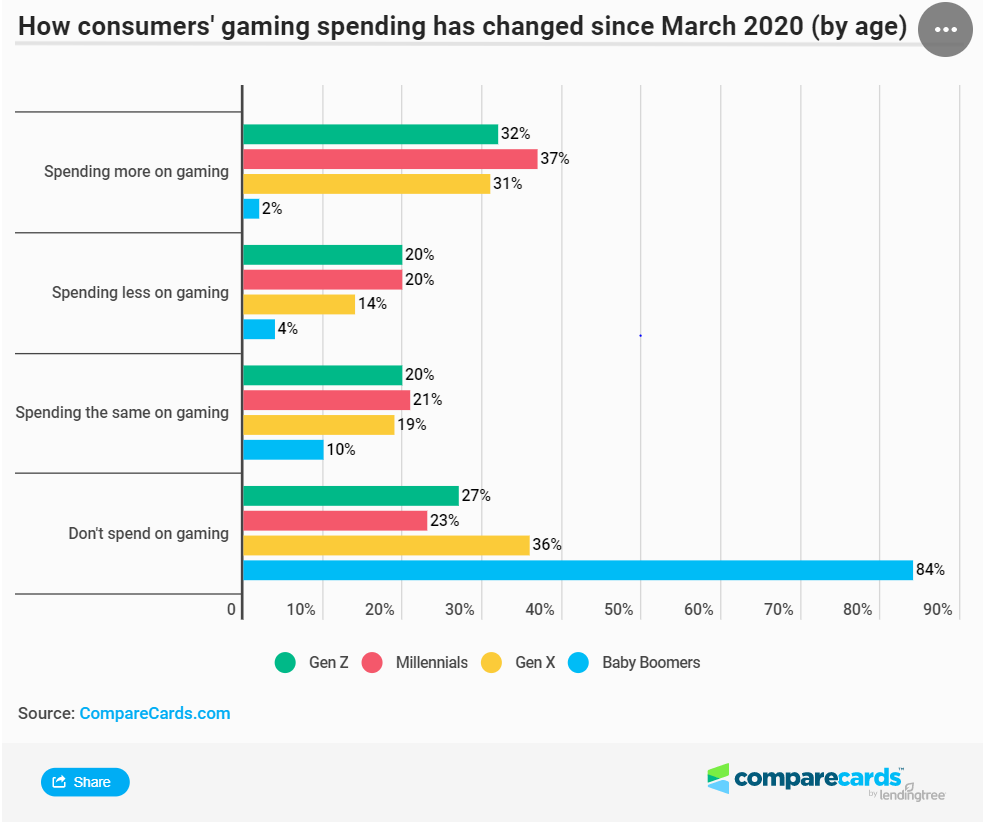 The report also found that gamers facing a loss of income because of the coronavirus pandemic actually tended to spend more money on games, despite the lack of disposable income. “The average gamer whose income was impacted spent about $424 on gaming since the pandemic started, while gamers whose income wasn’t impacted spent just under $360,” Comparecards said.

Comparecards broke down the spending by age and gender, finding that 37% of men versus 10% of women reported increasing their gaming spend in the last 90 days. Baby Boomers are the least interested in video games, and their spending only increased 2% — compared to a 37% increase in spending by Millenials.

“While video games are a beloved pastime for many gamers, consumers who don’t typically play games have begun to see the appeal while social distancing, as half of all consumers made at least one gaming-related purchase within the past year,” Comparecards noted. “Men in particular, as well as millennials and members of Gen Z, are more likely than others to have spent money on gaming.”