We all love celebrities because they’re pretty to look at. We like to speculate on their affairs, relationships and gender preferences. It’s fun! Like rubbernecking an accident. 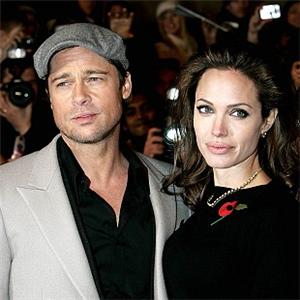 But can we now summon our inner grown-up, take a collective breath and focus on more important things than stars on coffee runs? Like unemployment, health care, Haiti, indigent populations, war and terrorism?

I realize this is a downer for an audience dazzled by tall, 3D blue Smurfs and are-they-or-aren’t-they-separating speculation. But come on: Can we talk, as Joan Rivers might ask?

It may be a stretch to hope for a sudden cessation of photo whores trolling for filthy lucre, but can we at least tone down the mass celebrity-inspired hysteria?

Last week anyone who glanced at a screaming schmear-rag hed was assured Brangelina, that beautiful power couple, was headed into the Star Chamber of legal “divorce” — hard to do when you’re not married.

But hey, this is La-La Land, where every fantasy (and nightmare) comes true!

Until it doesn’t. Brad and Angie (we’re on a first-name basis) are impossibly gorgeous, wealthy beyond imagination and have created a mini-United Nations of their own. So what? They have the money, nanny-power and bucks to do this while globetrotting for various causes.

If Greta were alive, she’d probably wish that Brangie would be left alone, too.

I am not only sick of reading about this couple, but I feel sorry for them. I once was witness to what insane lengths “fans” (from the word “fanatical”) would go for a glimpse of the royal beauties.

The golden couple shot "Mr. & Mrs. Smith" (the film that supposedly precipitated the Jen/Brad split) in a tony Long Island suburb a few towns from where I lived.

During this “event” the local news gossiped about the couple as though they were gods. Every day more fans would show up to catch a glimpse.

Has society gone totally bonkers? Remember the “death of gossip” as proclaimed by Liz Smith post-9/11?
That lasted.

My hope for the New Year: We stop fixating on celebrities and start fixating on fixing the world. I think there’s a movie in that. Any takers?