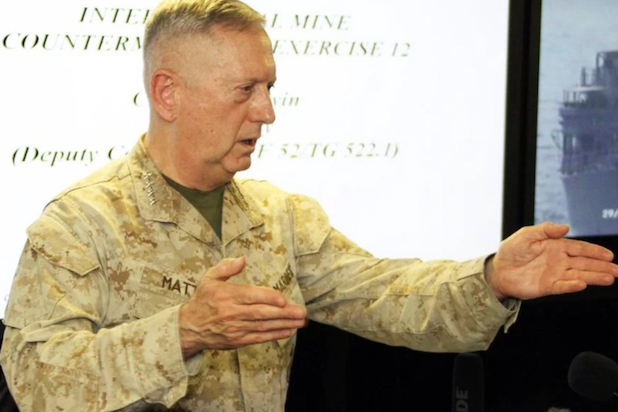 Defense Secretary James Mattis has frozen President Trump’s transgender military ban, saying he will allow transgender service-members to continue serving in the military pending the results of a study by experts.

In a statement Tuesday, Mattis announced he was convening a panel of experts to examine the issue in order to determine “what is best for the military’s combat effectiveness leading to victory on the battlefield.”

“Once the panel reports its recommendations and following my consultation with the secretary of Homeland Security, I will provide my advice to the president concerning implementation of his policy direction,” he said in the statement. “In the interim, current policy with respect to currently serving members will remain in place.”

Also Read: Trump Bans Transgender People From US Military 'In Any Capacity'

Mattis’ announcement, first reported by USA Today, comes in response to an order from Trump declaring that transgender service members could no longer serve in the military.

Trump’s executive order gives Mattis until Feb. 21, 2018, to submit a plan for implementing the new policy. It also gives him discretion as to whether to remove current troops.

The White House did not respond to TheWrap’s request for comment. But a spokesperson for the Department of Defense told TheWrap: “This was of course coordinated with the White House. The president and Secretary Mattis are not at odds at all. The president gave a directive, and the secretary is implementing it ‎exactly as he would any other directive- through careful research and consultation with experts who can best advise the on the way to move forward.”

“The Department of Defense has received the Presidential Memorandum, dated August 25, 2017, entitled “Military Service by Transgender Individuals.” The department will carry out the president’s policy direction, in consultation with the Department of Homeland Security. As directed, we will develop a study and implementation plan, which will contain the steps that will promote military readiness, lethality, and unit cohesion, with due regard for budgetary constraints and consistent with applicable law. The soon arriving senior civilian leadership of DOD will play an important role in this effort. The implementation plan will address accessions of transgender individuals and transgender individuals currently serving in the United States military.

Our focus must always be on what is best for the military’s combat effectiveness leading to victory on the battlefield. To that end, I will establish a panel of experts serving within the Departments of Defense and Homeland Security to provide advice and recommendations on the implementation of the president’s direction. Panel members will bring mature experience, most notably in combat and deployed operations, and seasoned judgment to this task. The panel will assemble and thoroughly analyze all pertinent data, quantifiable and non-quantifiable. Further information on the panel will be forthcoming.

Once the panel reports its recommendations and following my consultation with the secretary of Homeland Security, I will provide my advice to the president concerning implementation of his policy direction. In the interim, current policy with respect to currently serving members will remain in place. I expect to issue interim guidance to the force concerning the president’s direction, including any necessary interim adjustments to procedures, to ensure the continued combat readiness of the force until our final policy on this subject is issued.”