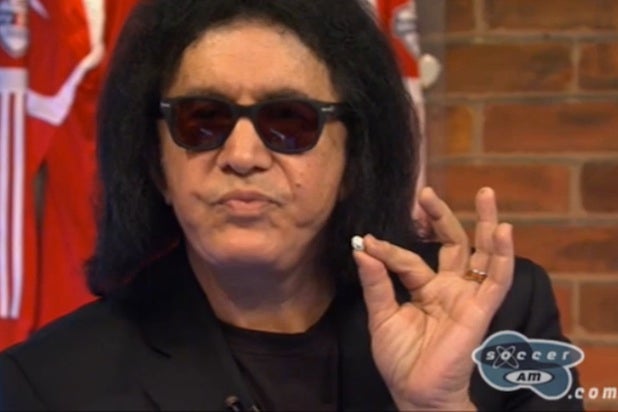 Gene Simmons’ gum is now almost as accomplished as his tongue.

A piece of gum chewed by the KISS singer during a September 28 appearance on Sky TV’s “Soccer Am” has been auctioned off on eBay for over 153,800 British Pounds, which amounts to approximately $245,602.

The sports talk show put the gum up for sale to raise money for the United Kingdom’s Street League Charity, an organization which benefits young people through the power of football, and 99 people put in a bid score on the unusual collector’s item.

Simmons put forth the idea on the show when preparing to show off his signature tongue tricks.

“Moms and dads, you may want to hide your children, because I will show you why they call me the king,” Simmons said before popping a piece of gum out of his mouth and sticking it on one of the hosts script. “I’ll take this gum — eBay, eBay.”

“It’s an honor to know that a piece of my chewed gum resulted in a [$245,602] donation to benefit young people,” Simmons said in a statement. “Sometimes little things can have big results.”

The lucky millionaire (or poor fool who spent his entire life savings) will receive the piece of gum, along with the script it is stuck to, and its original packaging. As you can see in the photo below, nothing is in mint condition.