TheWrap was in the house and got all the real-time action you won’t see on TV, starting with …

Many of Hollywood’s most powerful brass sit on the board of the American Film Institute, so naturally they’re invited to the big show. And come they did. Walt Disney Studios chairman Alan Horn attended, chatting up social types and journalists in the gallery bar of the Dolby before dinner.

Tucked in a corner at the back of the house, furrow-browed and preoccupied, was Warner Bros. Entertainment CEO Kevin Tsujihara. In fairness, news that a federal court would approve the merger of WB owner Time Warner and tech giant AT&T was not yet decided or released. He was likely dodging uncomfortable questions from half the room (the show was taped on June 11).

He wasn’t the most embattled executive there by a mile. Ironically, the most boisterous in the building was Leslie Moonves. Headlines were still raging about the CBS Corp. CEO’s contemptuous and extremely public battle with boss Shari Redstone. Nothing deterred him that night, with wife and anchor Julie Chen on his arm. The pair were rolicking from table to table, laughing and smiling with their peers.

We also spotted Paramount CEO Jim Gianopulos, who had a lengthy conversation with the man of the hour. Other industry types in the room included Clooney’s longtime agents and CAA managing partners Bryan Lourd and Kevin Huvane. The former sat at Clooney’s table with husband Bruce Bozzi. 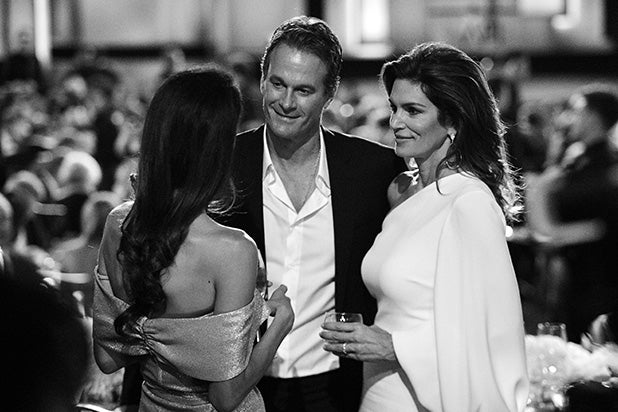 The AFI tribute is perhaps the least private night of a given honoree’s life. Your career, loved ones, accolades and many individual characteristics and quirks are laid bare, but it’s a joyous kind of exposure.

Still, it was a bit shocking to see how bold many of the invited dinner guests — some big stars in their own right — were in marching up to Clooney and his wife, Amal, to take selfies.

Protocol dictates that after the guest of honor is introduced and heads to their table (a procession that is captured by TNT’s cameras) production takes a break and everyone is invited to eat dinner. With a forkful of breaded cod and cauliflower prepared by Wolfgang Puck in his mouth, guests marched up to Clooney and jutted their phones in front of his face.

No “may I?” Not even a request that he stand. People wanted their Instagram name-drop and then to go about their business. Clooney was, of course, graceful and compliant. Amal even soldiered through one or two as the Audi-sponsored event raged on.

Also Read: All the Stars at Royal Wedding of Prince Harry and Meghan Markle (Photos)

In breaking with custom, the AFI offered a coffee-table-style retrospective of Clooney’s work as a token of the evening for dinner guests. Past years have doled out home entertainment box sets with honorees’ greatest hits. Another hit for the DVD market.

Lets’s switch it up — here are a few things you’ll only see on TV, if at all. There were a few conspicuous stars missing in the flesh at the Dolby. Julia Roberts was originally announced as the A-lister who would physically hand the trophy to Clooney, which also comes with the added pressure of delivering the most succinct and poignant speech.

She pulled out last minute with no explanation. Appearing via video message in what seemed to be a costume (from her Amazon drama “Homecoming,” we’d guess), Roberts’ gag saw her on the side of the road holding a sign that read: “Honk if you love George.”

Shirley MacLaine filled in and delivered an emotional and worthy speech though, even she had to admit onstage, she doesn’t know the guy that well.

Also absent was Clooney’s “Oceans” partner in crime Brad Pitt, who appeared via pretaped message in a skit about Clooney’s legendary pranks. Matt Damon, another “Oceans” star who also led the Clooney-directed film “The Monuments Men,” was neither seen nor heard from.

Don Cheadle held it town for the original cast of the Steven Soderbergh heist film family.

Clooney is a part owner of Casamigos Tequila, which was suspiciously absent from the tables in the Dolby. That’s probably because it was on ice and perched on every free surface at the Clooneys’ after party.

West Hollywood eatery and renowned celebrity haunt Craig’s played host to a precious few of the couple’s best friends. Their Casamigos partners and vacation pals Cindy Crawford and Rande Gerber were present. The fete’s unofficial emcee was Jimmy Kimmel, practically the first one to arrive who beamed at guests as they packed in.

Tumblers of scotch were also passed. Marina sauce was spilled. Frank Sinatra was barely heard over conversations late into the night.

George Clooney's costars (like Cate Blanchett), pals (like Julia Roberts) and studio heads flooded the home of the Oscars to honor him with the AFI Life Achievement Award on Thursday. Bill Murray and Miley Cyrus' backstage party for two topped the social scene at the Dolby Theater in Hollywood.