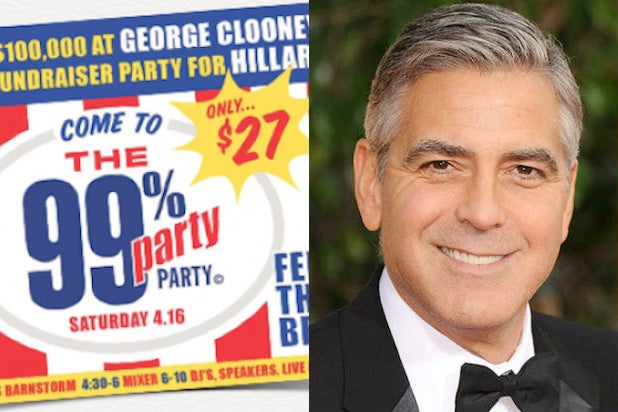 And you thought the Republican presidential race was bonkers. As Hollywood’s royalty marched over to George Clooney and his wife Amal‘s house for the fundraising event of the 2016 season, a multimillion-dollar party for Hillary Clinton’s presidential campaign, the actor’s next door neighbor in Studio City is holding his own soiree… for her rival, Bernie Sanders.

Howard Gold, whose family founded the 99 Cent Only Store franchise, is hosting a fundraiser/protest event provocatively dubbed the “99% Party,” with tickets priced at a very Sanders-like $27, according to The Hill.

That’s a far cry from Clooney’s pricey party, where tickets cost as much as $353,400 for couples wanting to sit at the head table with the former Secretary of State and the Clooneys. The money will be going to The Hillary Victory Fund, a joint fundraising committee for Hillary for America, the Democratic National Committee and the Democratic committees of 32 states.

A longtime Clinton Hollywood backer who was at the event noted that the money raised is not just for her, but for anyone who ends up winning the nomination — including her rival Bernie Sanders — as well as “other Democrats down the ticket” running in November, adding that “Bernie should be jumping up and down instead of complaining about it.”

The invite to Gold’s event, sent to Sanders supporters on Saturday, reads: “Swimming pools, Movie Stars, and merriment for all! This is happening right next door to Clooney’s party for Hillary!”

And if you don’t have even that modest amount for the ticket, no worries. The invitation promises “no-one (will be) turned away for lack of funds” — continuing a theme that the Vermont Senator has made in criticizing Clinton for her ties to wealthy donors on Wall Street as well as in Hollywood.

Apparently things are getting heated around the venues, as Sanders supporters showered Clinton’s motorcade with 1,000 $1 bills as she arrived.

We just made it rain a thousand one dollar bills on Hillary Clinton's motorcade. #ClooneyCounterparty

A large group of Sanders supporters also lined the street leading up to Clinton’s fundraiser, chanting “Feel the Bern.”

On Friday,  another group of protesters protested another Clooney fundraiser in San Fransisco, banging pots and pans and blocking off intersections as they chanted, “Hey hey, ho ho! Corporate greed has got to go!” and “Citizens United has got to go!” Many carried signs that read,”Feel the Bern!”

Clooney’s fundraising extravaganza in Studio City was the talk of Hollywood all week, with tickets starting at $33,400 per person. Co-hosts for the event include Jeffery and Marilyn Katzenberg, Steven Spielberg and Kate Capshaw and Haim and Cheryl Saban.

A source told TheWrap that “HRC floated between two head tables. One hosted by George and Amal [Clooney] and one hosted by Marilyn and Jeffrey [Katzenberg].”

About 150 people attended the event.