Georgina Bloomberg and Jennifer Gates were among the top competitors at the Longines Masters of New York last weekend, where the biggest names in show jumping battled in the ring for prize money totaling nearly $1 million at the American leg of the Longines Masters Series.

The daughters to business moguls Michael Bloomberg and Bill Gates, respectively, were among 80 top-ranking and up-and-coming riders — including world champions and Olympians McLain Ward and Beezie Madden — from 14 different countries competing over four days at NYCB LIVE, Home of the Nassau Veterans Memorial Coliseum in New York.

Microsoft heir Gates’ boyfriend Nayel Nassar (pictured together below) and his horse Lucifer V won the Longines Grand Prix on Sunday, taking home the $400,000 prize money. Beating out Harrie Smolders by nine seconds, Nassar’s victory made history as he became the first rider to ever win both the Longines Speed Challenge and Longines Grand Prix with the same horse. 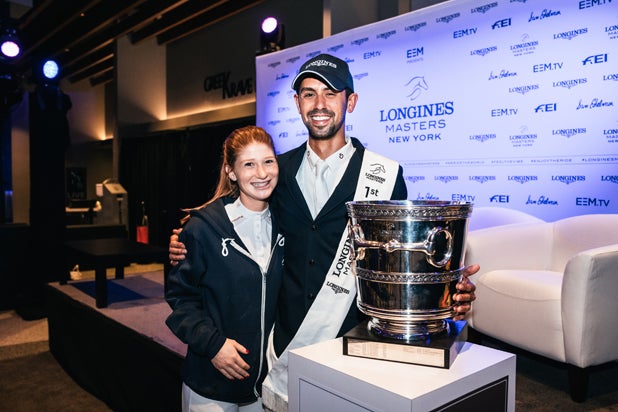 “It’s unexpected, really!” Chicago-born, Egyptian rider Nassar said when asked about making Longines Masters history. “It means the world. Thank you, Christophe [Ameeuw], for providing us with this platform. We can’t showcase what we do without a platform to do it on and I’m really grateful. I’ve always loved these shows and hopefully I can keep making it a target of mine.”

Along with the equine athletes jumping on Friday, the American Kennel Club also hosted the first-ever 2019 AKC Agility Premier Cup presented by EEM to be held in conjunction with the Longines Masters of New York — or any other equestrian event — as 60 dogs competed for $10,000 in cash prizes.

After traveling to Paris, Hong Kong and New York, the Longines Masters Series will conclude June 20-23 in Lausanne, Switzerland.