The Sports Illustrated swimsuit issue that just hit newsstands gives readers a way to instantly receive videos of the models on their phones.

They’re called JAGTAGs and TheWrap readers can give it a try by clicking here. Access the exclusive content by sending a photo of a “mobile beauty,” which will return a video via MMS directly to your phone. 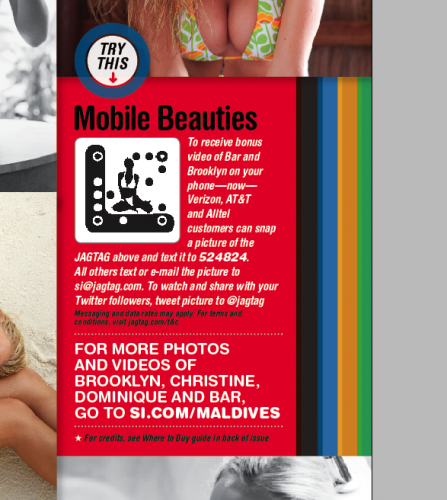 Unlike other 2D barcodes, JAGTAG delivers swimsuit videos to both standard phones and smartphones without requiring the consumer to download an application or have access to the mobile web.

Last year, the Sports Illustrated swimsuit edition used JAGTAGs for users to receive photos of the rookie models; the magazine sold 4 million copies of that issue.

“The 2010 swimsuit edition is a mass media event and JAGTAG is the only 2D barcode solution capable of reaching a mass mobile audience,” said Charlie Saunders, SI’s executive director of integrated marketing.

“We can return multimedia to 90 percent of all mobile users in the form of images, image galleries, video, audio, text with images,” said Dudley Fitzpatrick, JAGTAG’s founder and chief innovation officer. “Every carrier and handset’s capabilities vary. We can deliver multimedia content via MMS (multimedia messaging service, aka picture message), mobile web link (SMS), email or Twitter. Depending upon the phone and wireless network, videos can be between 20 seconds and several minutes long. Number of images can be between 15 to 30. Formatted images and text can be many pages. We can send an MMS and a mobile web link to smart phones. The bottom line is that whatever the specific phone can take, we can deliver.”

“More than 60 million readers will have the opportunity to use their phones to instantly enjoy these videos,” he said.

The magazine first used the technology in July 2009 for the successful launch of the swimsuit issue archives. “What they found was that 25 percent of SI readers were smartphone owners and the other 75 percent owned standard phones,” Fitzpatrick said.

Other JAGTAG campaigns include Fox Entertainment, which shared a mobile video via print advertising in Playboy promoting the "Wolverine" DVD release. Nokia shared a product video and a chance to win an N97 mobile phone.

JAGTAG has made other inroads into Hollywood: “We have run three programs with Fox Entertainment as well as the NBC 2010 Winter Olympics,” Fitzpatrick said. “We have more in the works with multiple partners.”

What’s the next step? “It’s to continue to help the mass majority of consumers engage JAGTAGs when they want, where they want, to get what they want,” he says. “For us, it’s not about integrating a new ‘niche technology’ with little impact on the marketplace. It’s about connecting power advertisers and publishers with a mass mobile audience through technology the whole world can use today.”

That includes potential use of JAGTAGs for U.S. broadcasters engaged in distributing their content via mobile.

“JAGTAG is a wonderful way to allow mobile consumers to sample their shows,” Fitzpatrick said. “We are also working on on-demand solutions where people can engage a JAGTAG to watch a program instantly on their phone.”