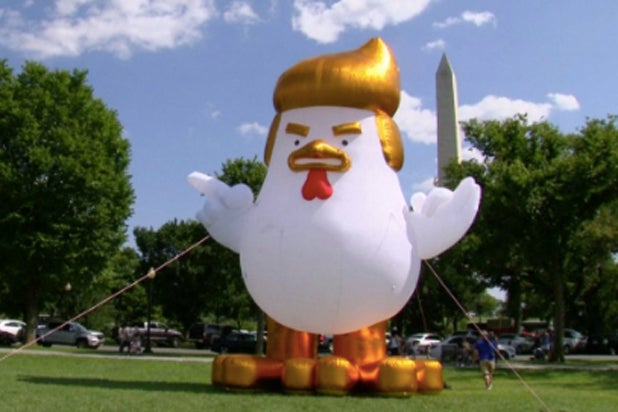 President Trump is on a golf trip in New Jersey this week, but his presence is still hovering over the White House in the shape of a giant inflatable chicken.

The effigy — or should we say egg-ify? — took roost on the a grassy spot known as the Ellipse overlooking the presidential home on Wednesday afternoon.

Starring somewhat disapprovingly across at the White House, the golden-haired foul captivated both tourists and Washington, DC, media crews.

Also Read: That Time Trump Said He'd 'Negotiate Like Crazy' With North Korea... Back in 1999 (Video)

According to the Washington Post, the Trump chicken has appeared in the nation’s capital before, most recently before a protest in April to pressure Trump into releasing his tax returns.

However, not everyone was seeing the funny side, as some Republican supporters criticized the move considering the current delicate situation with North Korea.

“Hey that’s a smart idea during a potential nuclear standoff. Imply Trump is a chicken and won’t push the button,” one wrote.

See some of the best chicken jokes and more serious criticisms on Twitter below.

3/ THIS is how we respond. Support those who tell inconvenient truths…while we still can. KG. Oh, and #TrumpChicken https://t.co/WXvdUfUUs5

The democrats are $3M in debt. Same party who spent $30M in Georgia wasted $ on a chicken.

You can't make this up!#TrumpChicken

Who would you prefer be president? An inflatable Trump chicken, or Trump?#TrumpChicken

Hey that's a smart idea during a potential nuclear standoff. Imply Trump is a chicken and won't push the button. #TrumpChicken

So, I guess the message to take away from Trump chicken is democrats don't want us to tell North Korea not to harm us. ????????☠

The cost of #TrumpChicken: $1,300
The cost of seeing it outside the White House: Priceless#maddow pic.twitter.com/FJEIEzozdU

Filmmaker Taran Singh Brar is behind the #TrumpChicken. He says he bought it for $1300. ????pic.twitter.com/LEYIzuNN9k

Barron Trump is some where terrified because he thinks his dad has been turned into a giant chicken. #TrumpChicken pic.twitter.com/fgUyyZ3myt