Gilbert Gottfried’s death on Tuesday was met with a flood of reactions from actors, comedians, and others who had worked with or met the prolific performer over the years. Known for his iconic voice and stand-up delivery, along with voiceover roles in shows and films like “Aladdin,” Gottfried died from complications related to muscular dystrophy.

“We are heartbroken to announce the passing of our beloved Gilbert Gottfried after a long illness,” his family wrote in a statement posted on his Twitter account. “In addition to being the most iconic voice in comedy, Gilbert was a wonderful husband, brother, friend and father to his two young children. Although today is a sad day for all of us, please keep laughing as loud as possible in Gilbert’s honor.”

Gottfried’s five-decade comedy career – which began at the ripe age of 15 – ushered him through some of entertainment’s most vaunted venues, from “SNL” and Hollywood backlots to celebrity roasts and game shows. Now, his admirers and colleagues are sharing their memories of Gottfried on social media.

“Last Week Tonight” host John Oliver posted a clip from a segment featuring Gottfried, writing, “Gilbert Gottfried was the best. We once decided to punish UK audiences for their law prohibiting the use of parliamentary footage in comedy programs, by having him read Brexit legalese and Bigfoot erotica. Stick around till he gets to the erotica.” 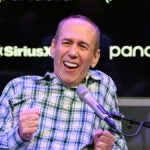 “CODA” star Marlee Matlin shared a picture of herself onstage with Gottfried at an awards show along with a heartfelt message. “I am so sad to read about the passing of Gilbert Gottfried,” she tweeted. “Funny, politically incorrect but a softie on the inside. We met many times; he even pranked me on a plane, replacing my intepreter @655jack(they’re like twins). Sending love to Dara & his children. RIP #gilbertgottfried”.

TMZ remembered Gottfried with a classic video of the actor pretending to shun the paparazzi. In the clip, he climbs onboard a TMZ tour bus and joking yells at the passengers, “Can’t I have privacy? Just because I happen to be a mega-star, a worldwide international sex symbol and I don’t feel I should be followed around like this!”

In an email to TheWrap, the National Comedy Center looked back on Gottfried’s extensive accomplishments. “Gilbert Gottfried was brilliantly talented, absolutely fearless and beloved by the comedy community and his loyal fans. There was no line he wouldn’t cross – as long as it was funny,” executive director Journey Gunderson wrote. “From stand-up to television and film, from animated characters to podcast host, Gilbert put an indelible stamp on everything he did. We were thrilled to tour him through the National Comedy Center a few years ago and honored to preserve much of his work here in our museum.”

Read on for more tributes to the celebrated comic.