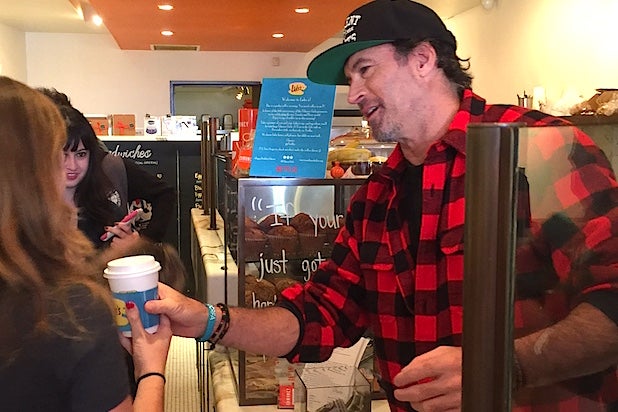 “Gilmore Girls” fans lined up around the block in several cities across the U.S. on Wednesday for a cup of free coffee from the show’s unforgettable Luke’s Diner.

Pop-up cafes were decorated with the recognizable logo from the show’s fictional coffee shop, with some even donning the grouchy character’s familiar “no cellphones” sign.

Fans who went to Beverly Hills’ Comoncy were treated to a special appearance by Luke Danes himself, as actor Scott Patterson sidled up behind the counter to hand out java wearing a character-appropriate red-and-black flannel.

However, when TheWrap caught a snap of Patterson (above), he wasn’t wearing his hat backward (as Luke does on the show). Party foul.

Of course, the fan event comes ahead of the highly anticipated reunion series, “Gilmore Girls: A Year in the Life,” coming to Netflix in November.

For those who aren’t already in the know, Luke’s Diner served as a popular hangout for Lorelai (Lauren Graham) and Rory (Alexis Bledel) in the heart of the fictional Connecticut town Stars Hollow.

Netflix outfitted 200 cafes around the country with “Luke’s Diner essentials,” which included T-shirts, branded aprons, and a free cup of joe decorated with a Luke’s Diner coffee sleeve.

Fans were psyched to see their favorite diner come to life, as some reported to TheWrap having waited three hours to catch a cup from Patterson.

Such an awesome morning celebrating #GilmoreGirls today with some #LukesDiner action in #SanDiego ☕️❤️ pic.twitter.com/GyioVFKB7T