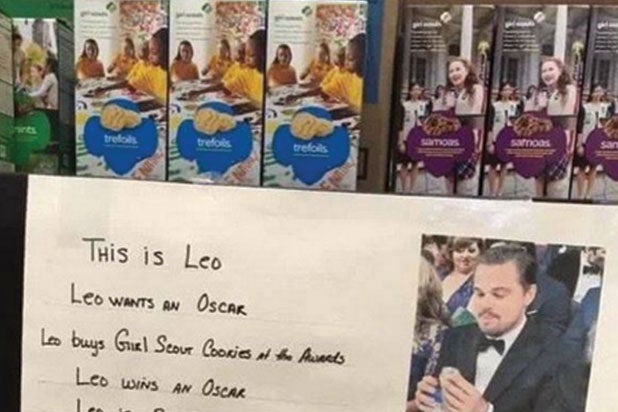 A Girl Scouts group in Long Island is taking advantage of Leonardo DiCaprio eating cookies at the Oscars.

They concocted a successful viral marketing campaign by creating a poster using a photo of “The Revenant” star opening a box of Trefoils at last month’s ceremony, where he won his first Academy Award.

The official Girl Scout Cookies Facebook page shared a photo of the poster, which now has 17,370 shares and over 60,000 reactions.

During the 88th Academy Awards, host Chris Rock helped the Girl Scouts raise $65,243, after sending them out into the Oscars crowd to hawk their tasty wares. After much speculation that the bit was simply a stunt, an official statement from the Girl Scouts confirmed the sum.

Be like Leo. Help girls change the world: bit.ly/1OmL0Tp