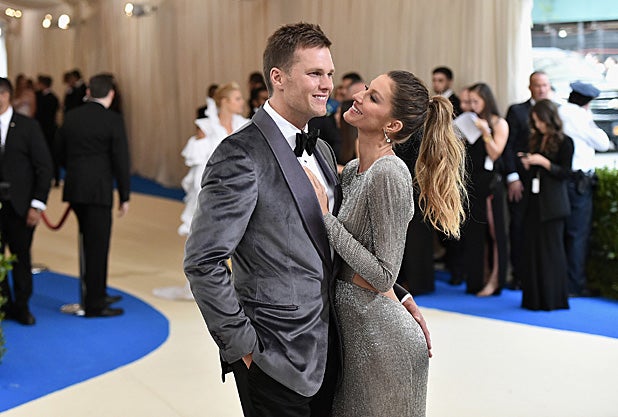 Did Gisele Bundchen slip up when talking about her Super Bowl champion husband Tom Brady on Wednesday?

In an interview with Charlie Rose on “CBS This Morning,” the Brazilian supermodel said that the New England Patriots quarterback “had a concussion last year. He has concussions pretty much every …” she said, before quickly catching herself.

“I mean, we don’t talk about it. But he does have concussions. I don’t really think it’s a healthy thing for anybody to go through,” Bundchen continued.

While any head injury is a big deal for NFL players, especially with the ongoing research into the dangers of CTE (chronic traumatic encephalopathy), this is especially important as it came as a surprise to Patriots fans and sports media alike as the team did not list Brady on injury reports.

Brady sat out the first four games of the season as punishment for his role in the Deflategate scandal and missed practice late in the season for leg, thigh and ankle injuries. But he was not listed on the league-required injury reports for a concussion or head injury at any point during either the 2016 calendar year or the 2016 season, the Associated Press reported.

When asked by TheWrap if the Patriots had reported a concussion for their starting QB last year, a representative from the NFL said: “We have reviewed all reports relating to Tom Brady from the unaffiliated neurotrauma consultants and certified athletic trainer spotters who worked at Patriots’ home and away 2016 season games as well as club injury reports that were sent to the league office.

“There are no records that indicate that Mr. Brady suffered a head injury or concussion, or exhibited or complained of concussion symptoms. Today we have been in contact with the NFLPA and will work together to gather more information from the club’s medical staff and Mr. Brady. The health and safety of our players is our foremost priority and we want to ensure that all our players have and continue to receive the best care possible,” the statement concluded.

Representatives for the NFLPA, the New Patriots and Brady’s agent, Don Yee, did not immediately respond to TheWrap’s request for comment.

NBC’s website Rotoworld, which diligently tracks all player injuries for obsessive fantasy football managers, stated Wednesday that “this is the first we’ve heard of it.”

“He’s never missed a game due to a brain injury, and missed the only 15 games of his career to injury in 2008 when he tore his ACL,” their report stated. “Expect Gisele’s words to get plenty of media attention considering the slow news cycle this time of year, but ultimately we don’t see anything coming of it as far as a punishment for the Patriots. She sounded more like a concerned wife.”

In her CBS interview, Bunchen went on to tell Rose: “I don’t really think it’s a healthy thing for your body to go through, do that kind of aggression all the time, that can not be healthy for you. I’m planning on having him be healthy and do a lot of fun things when we are 100 (years old) I hope.”

According to NFL Injury Report Policy, “clubs are responsible for reporting the information accurately to the public, to the opposing team, local and national media, broadcast partners and others.”

That includes the week before a scheduled game for the Practice Report, and a Game Status Report “with an accurate description of a player’s availability for the club’s next game.” Click here to read the full policy.

Brady, nicknamed the G.O.A.T. and still basking in his fifth Super Bowl victory under coach Bill Belichick, turns 40 in August.

He threw for 3,554 yards, 28 touchdowns, two interceptions and was named Super Bowl LI MVP after leading an epic comeback win to snatch his fifth Lombardi Trophy, so doesn’t appear to be slowing down any time soon. He’s also the cover star for “Madden 18,” shunning any speculation of a curse attached to the EA video game.

When asked about when he plans to retire, “I always said my mid-40s, and naturally that means around 45,” Brady told ESPN this week. “If I get there and I still feel like I do today, I don’t see why I wouldn’t want to continue.”

As for Gisele’s concern over his longterm health, Brady said a few days before her CBS interview: “My wife says lots of things sometimes. She makes decisions for our family that I’ve got to deal with. Hopefully she never says, ‘Look, this has to be it.’ … My wife and my kids, it’s a big investment of their time and energy, too.”

He added: “She also wants me to take good care of myself and still have my energy. My kids have grown up faster than I thought.”