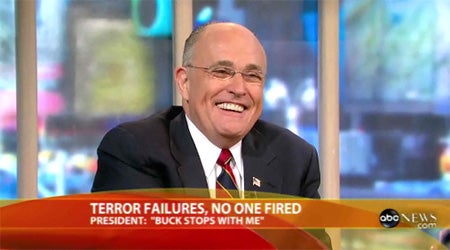 Rudy Giuliani, the former Republican presidential candidate and New York City mayor most remembered for his poise after the September 11 terror attacks, was interviewed by George Stephanapoulus on “Good Morning America” Friday. The topic: the Obama administration’s response to the failed Christmas plot by an apparent al-Qaeda operative to blow up a plane over Detroit.

Here’s an odd part of the transcript:

Giuliani: “What [Obama] should be doing is following the right things that Bush did — one of the right things he did was treat this as a war on terror. We had no domestic attacks under Bush. We’ve had one under Obama. Number two, he should correct the things that Bush didn’t do right. Sending people to Yemen was wrong, not getting this whole intelligence thing corrected.”

UPDATE: A Giuliani spokesman told ABC News Friday that the former mayor was “clearly talking post-9/11 with regards to Islamic terrorist attacks on our soil.”

Meanwhile, White House press secretary Robert Gibbs chimed in: "It’s interesting that the mayor of New York had forgotten that.”