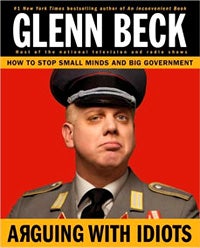 Glenn Beck, whose “Common Sense” has been at #1 on the New York Times bestseller list for paperback non-fiction for 16 weeks, is about to have another #1 book.

Beck’s “Arguing With Idiots: How to Stop Small Minds and Big Government” will debut at #1 on the liberal newspaper’s list for hardcover non-fiction when it’s released on October 11.

That's two bestsellers for a man who may or may not be bad for America.

This should bode well for Sarah Palin’s debut memoir, “Going Rogue,” which is slated to come out in November.