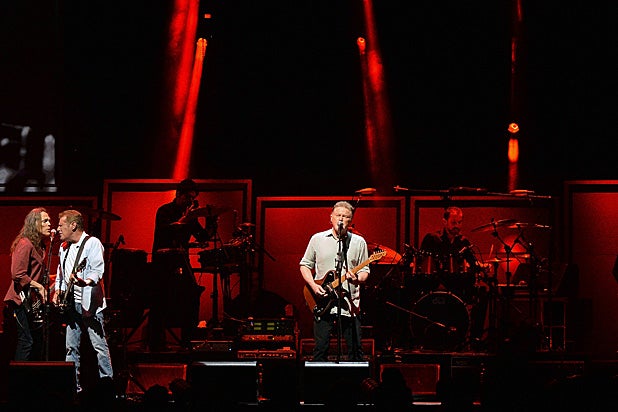 The news of Glenn Frey’s death quickly spread on Monday, with icons from the music and movie worlds honoring the Eagles founding member, guitarist and singer.

“It may be rainin’, but there’s a rainbow above you.” We love you, Frey,” actress and Tom Hanks‘ wife, Rita Wilson, wrote on Twitter.

“My friend from the early days, and important member of Eagles, has died. We loved you, Glenn Frey,” comedian Steve Martin said.

The musician and co-writer of hits such as “Hotel California” and “Take It Easy” recently took a turn for the worse after struggling with intestinal issues.

“Glenn fought a courageous battle for the past several weeks but, sadly, succumbed to complications from Rheumatoid Arthritis, Acute Ulcerative Colitis and Pneumonia,” a statement on the band’s website said.

Frey’s death can be blamed in part on the medications he was taking, Eagles manager Irving Azoff later told TheWrap. “He died from complications of ulcer and colitis after being treated with drugs for his rheumatoid arthritis which he had for over 15 years.”

Frey is a six-time Grammy winner and enjoyed solo success with songs including “The Heat Is On,” from Eddie Murphy‘s 1984 classic “Beverly Hills Cop.”

His bandmate, Eagles drummer Don Henley, expressed his condolences in a lengthy statement soon after the news was announced.

“He was like a brother to me; we were family, and like most families, there was some dysfunction,” Henley said. “But, the bond we forged 45 years ago was never broken, even during the 14 years that the Eagles were dissolved. We were two young men who made the pilgrimage to Los Angeles with the same dream: to make our mark in the music industry.”

"It may be rainin', but there's a rainbow above you." We love you, #Glenn Frey.

MT: Shocker. My friend from the early days, and important member of Eagles, has died. We loved you, Glenn Frey.

Glenn Frey, founding member of the Eagles, a band I just loved, has died. His songs, those sounds, perfectly captured those days. 70s LA…

"These cloudy days, make you wanna cry. It breaks your heart when someone leaves and you don't know why " Glenn Frey

Oh man #Glennfrey died? What are they putting in the water recently? #TheEagles

Man bummed to hear about this. Grateful for the brilliance he created. Thank you brother. #RIPFrey #Eagles https://t.co/MO87cKFsrR

Rest well Glenn Frey. So grateful for the soundtrack you gave my life. My love to all who knew him.

Glen Frey created the soundtrack of my life and was one of the nicest men I've ever met. Devastated.

So sad to hear of the passing of Glenn Frey. I had the great pleasure of knowing him and he was beyond gracious. Praying for his family. RIP

Wow. I had no idea. Versatile guy, this Glenn Frey. RIP, and thanks for the great, great music. https://t.co/Ju4HXhIbj8

R.I.P. Glen Frey….Thank you for all the great songs and powerful lyrics…Jesus can the reaper please take break for awhile…..

Thanks for the amazing music you gave the world, Glenn Frey. #rip

One of the greatest voices, musicians, contributors and collaborators to rock n roll music has passed away. RIP Glenn Frey

So saddened and shocked by the loss of Glenn Frey. Thank you for the music that paved the way for so many others.

A photo from the day I first met Glenn Frey and got to be an "Eagle" for a day. -1993 pic.twitter.com/gur4seY9qH

SHOCKED to report the death of GLENN FREY. Eagle & brilliant songwriter. We shared some memories at RRHOF. Shocked.. pic.twitter.com/0uVYgaKVIT