MPAA Chairman Dan Glickman will be stepping down from his position in April, five months ahead of his contract, while Bob Pisano, currently the president of the organization, will take his place, the lobby announced on Friday. 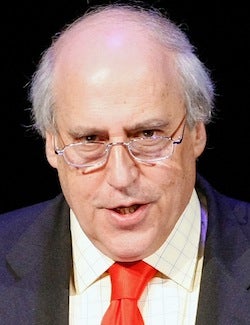 Glickman, a well-liked former secretary of agriculture, has been increasingly regarded as an awkward fit for the position, and recently apologies were offered to at least two studios for the MPAA’s taking a position on net neutrality with which they disagreed.

While Glickman has been a staunch proponent of protecting Hollywood’s intellectual property, some of the moguls felt he did not provide leadership for the strong personalities running the industry.

Glickman has taken a job as the chief of Refugees International.

Chairman of the MPAA since 2004, the mild-mannered Glickman was a stark contrast to the swashbuckling personality of his predecessor, the long-serving Jack Valenti.

A search for a replacement has been under way for a couple of months, but no candidates have yet been identified, according to individuals close to the search. One mogul recently said they were looking for "a killer," one indication of the qualities they might have considered lacking in Glickman.

The current lobbyists for the studios, Preston Padden for Disney and Matt Gerson for Universal, may be up for consideration.

"The problem is, no one really knows what the job is anymore," said another senior studio executive involved in the search.

The lobby position is regarded as one of the most coveted in Washington.

Barry Meyer, chairman of Warner Bros., said in a statement: “We thank Dan for his tireless support of the issues facing our businesses, particularly in protecting intellectual property rights in the United States and around the world.  We wish him every success in his new position.”

The MPAA released this statement on Friday:

Washington, D.C. – Dan Glickman, Chairman and CEO of the Motion Picture Association of America, Inc. (MPAA), today announced that he will be leaving the MPAA beginning April 1, to become President of Refugees International, the leading advocacy organization on refugee crises worldwide.  Bob Pisano, President and Chief Operating Officer at the MPAA since 2005, will become interim CEO, while the search continues for Glickman’s replacement.

“In making this announcement, I want to thank Barry Meyer, Jim Gianopulos, Brad Grey, Bob Iger, Michael Lynton, Ron Meyer, and the entire MPAA Board of Directors, for their guidance and leadership.  It has been an honor to have worked so closely with them.  I also want to thank Bob Pisano and all the MPAA staff for their dedication during a time of major transition in our business,” Glickman said.  “As I look forward to returning to public service and joining Refugees International, I am proud to look back at what the MPAA has accomplished since I took this job in 2004.  We have fought vigorously on behalf of the 2.4 million Americans and other workers throughout the world whose jobs are based on a vibrant film and television business.  This is a powerful medium that can help make a difference, and I will always value my time here.  For me, perhaps the best thing about the job was the movies.  I love movies.  And as far as I am concerned, we make the best movies in the world.”

Barry M. Meyer, Chairman and CEO, Warner Bros. Entertainment Inc., praised Glickman’s leadership.  “Dan has demonstrated great leadership in his role as Chairman of the MPAA.  He has guided the organization during a time of historic changes and unprecedented challenges throughout the entertainment industry,” said Mr. Meyer.  “We thank Dan for his tireless support of the issues facing our businesses, particularly in protecting intellectual property rights in the United States and around the world.  We wish him every success in his new position.”

Mr. Meyer continued:  “We would also like to express our gratitude to Bob for agreeing to be interim Chairman and have every confidence in his abilities to continue the crucial work of the MPAA.”

“Throughout his tenure at the MPAA, Dan served as an incredibly skillful and dedicated advocate for the issues that are most important to the film and television industries – global market access, copyright protection and ensuring an overall healthy future for our collective businesses,” said Jim Gianopulos, Chairman and CEO of Fox Filmed Entertainment.  “Furthermore, we look forward to working with Bob and are grateful that he’s agreed to serve as interim CEO over the near term.”

“Our industry has been well served by Dan’s efforts and advocacy worldwide and we appreciate the job he has done on our behalf.  He is a great humanitarian and will be very effective in his new role,” said Bob Iger, president and CEO, The Walt Disney Company.

Glickman, who has held the top position at the MPAA since 2004, had previously announced that he would not be seeking a renewal of his contract beyond September 2010 and has been working with the MPAA board during its search process for a new chief.

Glickman presided over the MPAA during a period of unprecedented transition in the film and television industry.  The rise of digital technology has presented both challenges in the form of massive copyright theft and innovative opportunities for filmmakers to share their work around the world.

Through his leadership, Glickman helped raise awareness of the economic consequences of copyright theft.  He also worked with a broad labor and business coalition to secure passage of the Pro-IP Act, which increased resources and enforcement to protect intellectual property.  And he has vigorously promoted a myriad of legitimate ways for consumers to view movies and TV shows on the Internet.

Glickman also helped lead the effort to win passage of legislation banning camcording in movie theaters throughout the United States and around the world.  And he worked to modernize the movie rating system, increasing its transparency and launching a free weekly Red Carpet Ratings email service that makes this resource more accessible to parents.

Bob Pisano has served as President and Chief Operating Officer of the Motion Picture Association of America, Inc. (MPAA) since October 2005 and brings to the MPAA a wealth of diversified experience in business and legal practice.  Pisano is responsible for all day-to-day worldwide operations of the motion picture and television industry trade association, and a member of the Board of Directors.

Prior to joining the MPAA, he was National Executive Director and Chief Executive Officer of the Screen Actors Guild.  Before his tenure with the Screen Actors Guild, Pisano served for six years at Metro-Goldwyn-Mayer (MGM) where he was first appointed Executive Vice President and then Vice Chairman and a member of the studio’s Board of Directors.  Prior to that, he served as Executive Vice President and General Counsel and Member of the Office of the Chairman of Paramount Pictures.