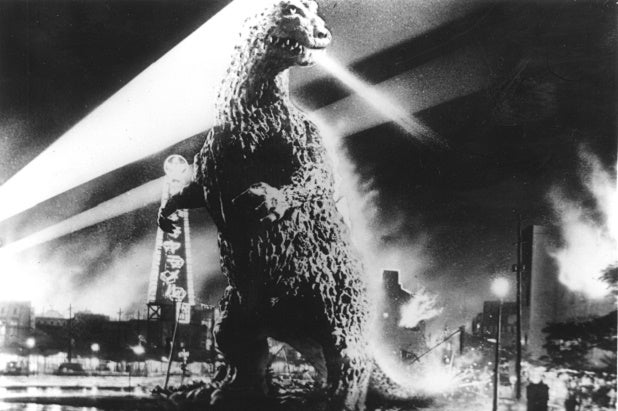 The original Big Lizard is going art house this weekend, and riding some huge coattails.

We’re not talking the big-budget Legendary Pictures-Warner Bros. action epic, which will open nationwide on May 16. It’s “Godzilla: The Japanese Original” — in all its 1954 black-and-white, subtitled glory — that distributor Rialto Pictures will have in 32 specialty theaters nationwide on Friday.

“We’d always planned to do something around the 60th anniversary,” Rialto’s sales director Eric Di Bernardo told TheWrap. “And when we heard about the new version coming out this summer, it seemed like a natural and we decided to go out a little bit ahead of it.”

The film, directed and co-written by Ishiro Honda, tells the iconic tale of American nuclear weapons testing creating the seemingly unstoppable giant reptile. The title was changed to avoid confusion in the marketplace, and it has played in a handful of theaters for the past couple of weeks and taken in $40,000.

Rialto acquired the rights to this “Godzilla” back in 2004, and did a limited re-release to mark its 50th anniversary at that time. Those were 35 millimeter film prints, the cost of which limited the scope of the release. This time around, digital prints are allowing for a smoother and broader rollout.

The specialty distributor got a pleasant surprise from a high-profile fan of the Japanese version, Gareth Edwards, the director of this summer’s would-be blockbuster.

“Legendary and Warner Bros. were nice enough to reach out and contact us, I think in part because Gareth is such a fan of the original film,” said Di Bernardo. Edwards wound up doing question-and-answer sessions in conjunction with screenings of the Japanese original at the South by Southwest and Turner Classic Movies film festivals.

Di Bernardo said that the plan is to keep “Godzilla: The Japanese Original” in theaters even after the 2014 version is released next week.

“As long as audiences want to check it out, we’ll continue to play it,” Di Bernardo said.