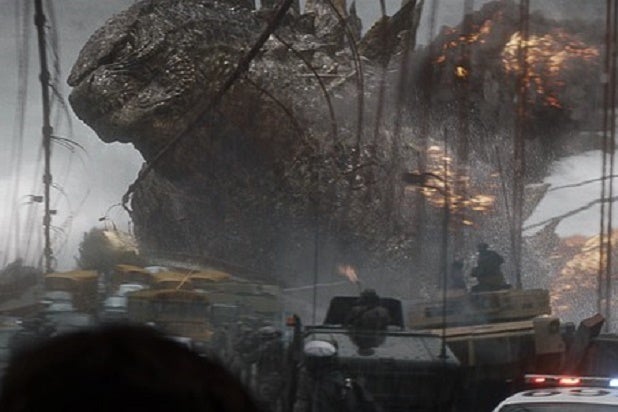 “Godzilla” has turned into a box-office behemoth.

The remake of the classic monster movie, a co-production of Legendary Pictures and Warner Bros., thundered to a $38.5 million opening day Friday — the biggest of any movie this year — and it could post 2014’s biggest box-office opening this weekend.

Its first-day total topped that of “Captain America: The Winter Soldier,” which had a $36.9 million Friday and wound up at $95 million in April. And “The Amazing Spider-Man 2” came in with $91 million earlier this month, after a $35.1 million first day, so “Godzilla” had a solid shot at beating those two.

Word of mouth will be the key for the effects-laden $160 million sci-fi saga, which smashed past the expectations of analysts, who had projected an opening in the $70 million range.

The Friday number was swelled by the $9.3 million it took in from Thursday shows, which began at 7 p.m., and 3D Imax screenings, which accounted for a hefty $6.2 million. Fan boys drove the early screenings, so the extent to which mainstream crowds turn out to catch the iconic big lizard will determine its final tally.

The reviews have been pretty good for a popcorn movie (73 percent positive on Rotten Tomatoes) and the Gareth Edwards-directed saga received a “B+” CinemaScore from first-night audiences. Bryan Cranston, Aaron Johnson, Elizabeth Olsen, David Strathairn and Ken Watanabe star.

How high the rampaging reptile’s grosses go is providing the suspense at the weekend box office, which is otherwise a blowout.

The only other movie opening wide, Disney’s Jon Hamm baseball movie “Million Dollar Arm,” took in $3.4 million Friday and is looking at $10.5 million and fourth place in its first weekend. It received an “A-” CinemaScore from audiences.

Last week’s champ “Neighbors” was a distant second with $8.3 million Friday, and Universal’s R-rated Seth Rogen-Zac Efron comedy should come in at around $26 million in its second weekend. It’s played well through the week and will top $90 million this weekend.

In its third week, Sony’s “The Amazing Spider-Man 2” brought in $4.5 million and is heading for a three-day total in the $15 million range. It will be over $170 million domestically by Sunday and its worldwide total should cross $600 million this weekend.

Fox’s “The Other Woman” was running fifth and looking at a $6 million fourth weekend, which would put the comedy over $70 million domestically. Sony’s faith-based “Heaven Is for Real” will come in at around $4.5 million for the three days, and will be up to $82 million after five weeks.

Sony’s Christian comedy “Moms’ Night Out” and the animated musical from Clarius, “Legends of Oz: Dorothy’s Return,” were ninth and tenth, with both likely to wind up around $2 million.