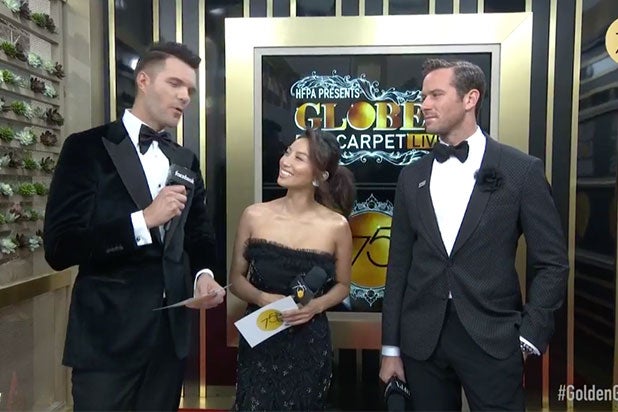 The Golden Globes are in full swing with stars wearing black to protest sexual harassment and abuse in the industry — yet viewers are roasting red carpet hosts on Twitter for their “idiotic small talk” instead of asking about the #MeToo and #TIMESUP movements.

“What is with the @e_entertainment hosts not asking their male guests about the #TIMESUP and #MeToo movements, missing the point much? #GoldenGlobes,” tweeted one user.

Other viewers commented on how the hosts consistently cut stars off while talking about the two movements, particularly while interviewing Kerry Washington, who has stood behind the Time’s Up coalition, or softballing questions about sexual harassment in general.

Hollywood’s elite are wearing black to the 75th Golden Globe awards to protest sexual assault, abuse and harassment in Hollywood, and to support those who have spoken out. This comes after heavyweights like Harvey Weinstein, Kevin Spacey, Dustin Hoffman, Louis C.K., Morgan Spurlock, and many more were accused of sexual misconduct.

Also Read: When and How to Watch the Golden Globes Red Carpet Live

This isn’t the first time women are wearing a certain color to make a political statement. Last January, women wore pink pussycat hats to protest the inauguration of president Donald Trump. In September, stars wore blue ACLU ribbons to the 2017 Emmys after Trump announced his plans to end DACA.

Representatives for E!, Facebook and The Hollywood Foreign Press Association have not yet responded to TheWrap’s request for comment.

Read tweets about the red carpet hosts below.

Serious question, do any of the Facebook live hosts know that #TimesUp is happening? #GoldenGlobes

Ok so are the hosts not allowed to say sexual harassment or what? #GoldenGlobes

what is with the @e_entertainment hosts not asking their male guests about the #TIMESUP and #MeToo movements, missing the point much? #GoldenGlobes

The E! hosts (robots) are so incredibly fake, rehearsed and insincere on the red carpet so any real convo is welcome. It'll distract them from patting themselves on the back to death for saying "why are you wearing" instead of "what"… ????#goldenglobes

@goldenglobes red carpet hosts bending over backwards not to say "sexual harassment" or "rape." They keep saying the black is about "equality" #GoldenGlobes #WhyWeWearBlack

I'm not feeling any of these hosts on the E red carpet. they're all awkward. Where's Seacrest? #GoldenGlobes

Omg this Red Carpet Show is so incredibly painful. Where did they find these hosts? No one wants to hear you fangirl/boy over these celebrities. So many of these actors and actresses have an important message to share tonight- let them talk!#actlikeyouvebeenhere #goldenglobes

Every single one of the hosts on the Facebook live show of #GoldenGlobes are awful! It’s like they’ve never interviewed a celeb before.

The E! hosts are just so bad. All of them. #GoldenGlobes

Anyone else think the #GoldenGlobes hosts are extra awkward this year?

I like the interviews and everyone focusing on #timesup and women, but listening to the @enews hosts make idiotic small talk is UGH. #GoldenGlobes pic.twitter.com/OSbXMnMuZk

Drinking game: Every time the red carpet hosts say "I love the pop of colorrrrrrrr with the black." #ERedCarpet #GoldenGlobes

Watching a #GoldenGlobes red carpet livestream and the hosts are so painfully unable to read the room I am shrinking in into myself.

It's great when the red carpet hosts actually ask the activists walking with the actresses a question. #goldenglobes

Applauding all the ladies at the #GoldenGlobes who brought activist as their plus one!…to all the hosts that keep cutting them off…STOP #TimesUp