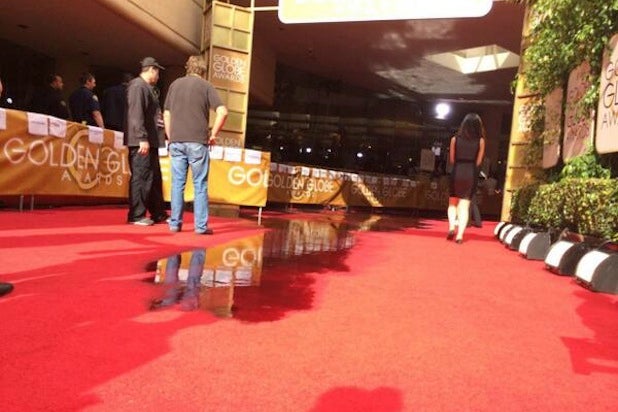 WORST: Stars, Bring Your Galoshes Fashion stylists throughout Hollywood threw a fit when at the last minute a sprinkler broke and spewed water onto the red carpet. 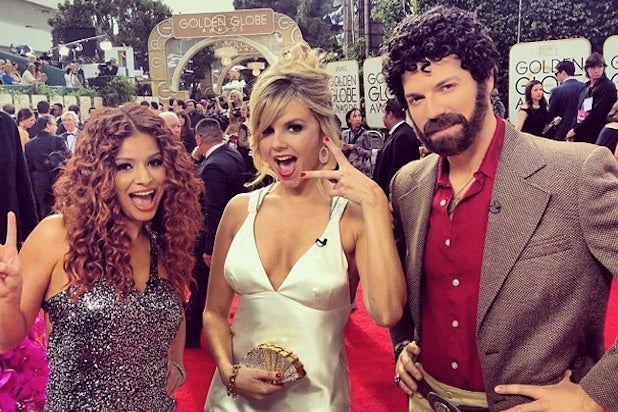 BEST: E! Does the 'American Hustle' Has E! revealed the film it’s rooting for between Golden Globes leaders “American Hustle” and “12 Years a Slave”? 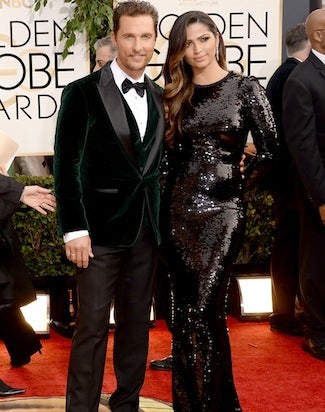 BEST: We're Emerald Green With Envy The "Dallas Buyers Club" star stood out from the best on the big screen last year and on the red carpet this year, while making his Golden Globe Awards debut. That's how you make a tux look good, gents! 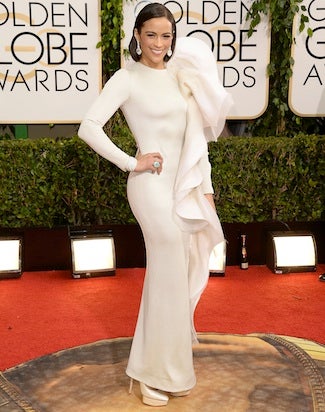 WORST: Paula Patton's Dress It's not easy to make this woman look bad, but whomever designed that dress pulled it off. 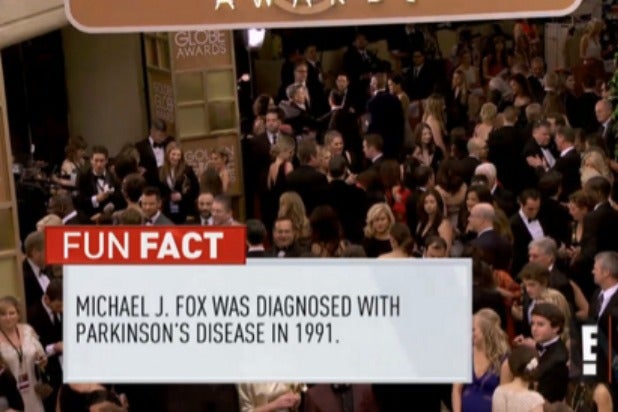 WORST: Oops. E! diagnoses Parkinson's as 'fun.' Sorry, E!. We giveth the best and taketh away. Your "fun fact" about when Michael J. Fox was diagnosed with Parkinson's disease made many viewers sick. 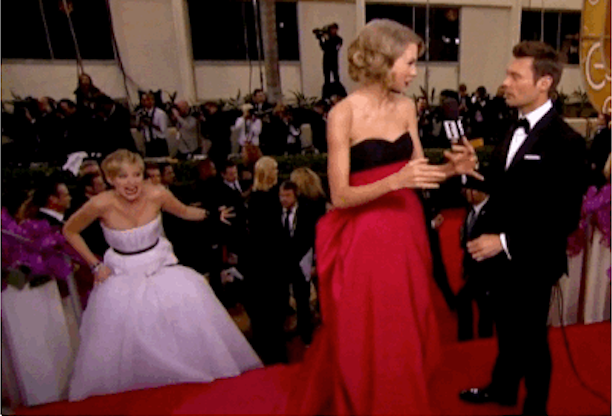 BEST and WORST: Actress down! Jennifer Lawrence has no problem making fun of Jon Stewart, touring the world to promote a movie and owning up to her own limited social life. But stairs? Stairs are a problem for the Kentucky native. Lawrence struggled her way up some stairs at the red carpet Sunday -- one slip shy of last year's Oscar performance. 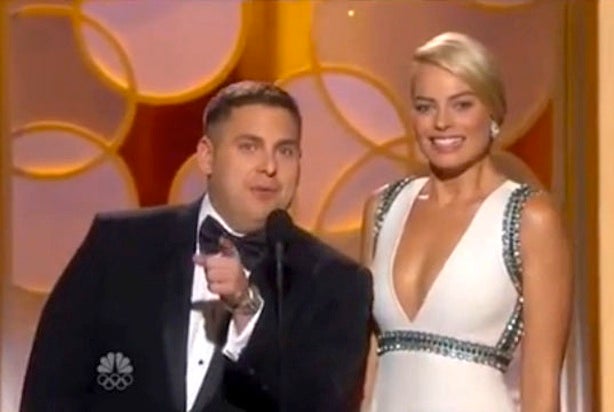 WORST: Teleprompter Flub Professional actors Jonah Hill and Margot Robbie proved incapable of ad-libbing while presenting their own movie, "Wolf of Wall Street," as the teleprompter was cued up for the speakers after them. Robbie apologized, and, not wanting to screw up her first time presenting, waited for someone to bring her a sheet of paper. Guys, Michael Bay already showed us how this is done. 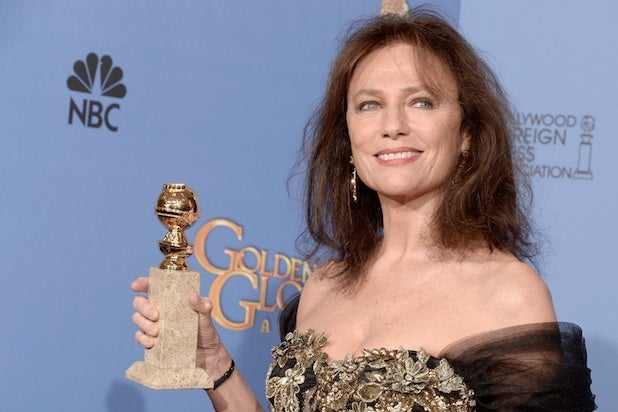 WORST: Acceptance Speech (Possibly Ever) Accepting her award for best supporting actress for "Dancing on the Edge," Jacqueline Bisset wandered onto stage and delivered a rambling speech punctuated by a number of awkward pauses, a promise to "get this together," and an S-bomb that the network censors missed by thismuch. Gary Busey suddenly seems like a Mensa member by comparison. 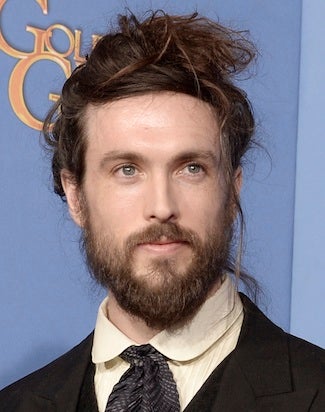 BEST: Impression of a Bird's Nest Seriously, what was that thing perched on top of the Best Original Score winner's head? Would anybody have been surprised if a bluebird had popped out of it and delivered Ebert's acceptance speech for him? And yet, one suspected that the tangled mess of strands perched on Ebert's noggin just might be holding the universe together. 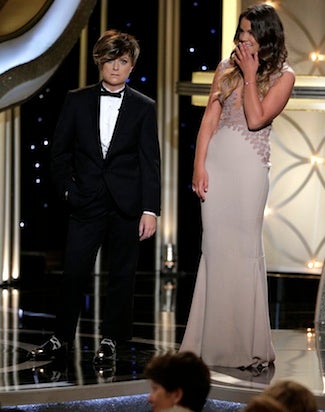 BEST: Cross-Dressing (Female-to-Male Division) Golden Globes co-host Amy Poehler added a flair of transvestitism to the festivities when she donned a Bieber-esque wig to masquerade as fellow co-host Tina Fey's bratty son demanding to know if Idris Elba or Harvey Weinstein was his father. Hmm, this sounds like a case for Maury Povich. 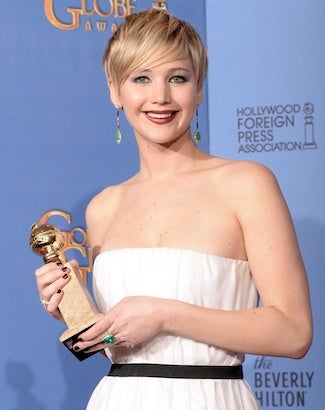 BEST: Two awards and still nervous It's quite refreshing to see young stars who aren't jaded by their rising fame. Jennifer Lawrence was visibly shaking while she accepted her second Globe in two years. 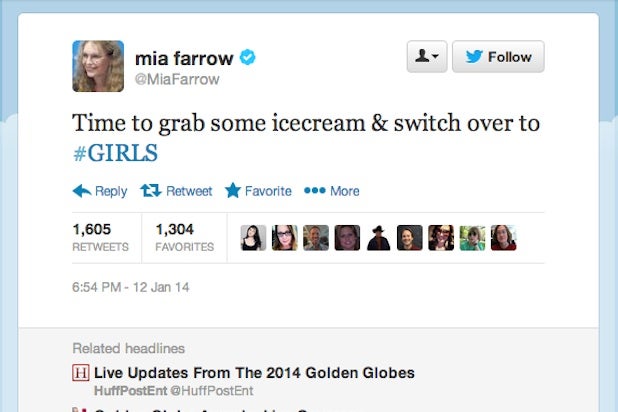 BEST and WORST: Wedding Diss Woody Allen's ex-partner abandoned the telecast just before Diane Keaton accepted the Cecil B. DeMille award on the director’s behalf. What was more important than watching her ex honored? HBO's "Girls." 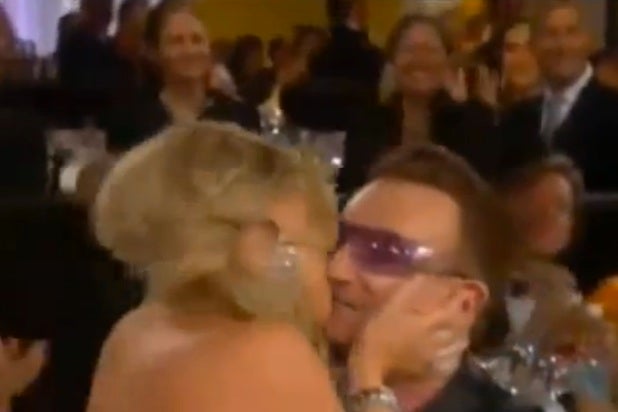 BEST: Kiss Me, I'm a Rock Star Too! Amy Poehler made out with Bono and then gave a surprisingly heartfelt acceptance speech after winning best actress in a TV comedy. Now, that's how you say thank you. 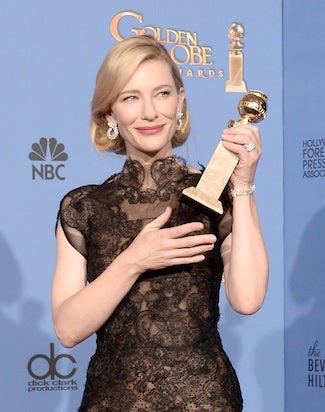 WORST: Judy Garland Can't Defend Herself Someone should tell Cate Blanchett that one shouldn't really speak ill of the dead. During her acceptance speech, she thanked Sony Classics' co-chiefs "for plying me with vodka in the same way that Judy Garland was probably plied with barbiturates." 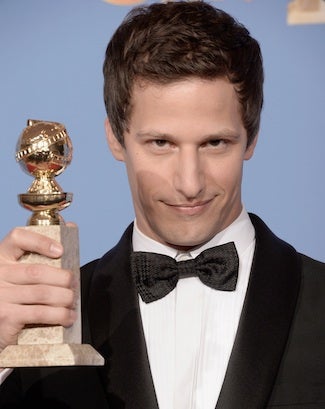 BEST: 'Brooklyn Nine-Nine' Upset In a shocker, "Brooklyn Nine-Nine" won top TV comedy, and its star, Andy Samberg, Lead Actor in the genre. The baton has officially been passed to Fox's excellent first-year series, as casts from mainstays "Big Bang Theory" and "Modern Family" watched on from the orchestra. It's nice to see both the sitcom's top dog and his top-notch surrounding ensemble both get rewarded. Also, Samberg had potentially the best acceptance speech of night, despite its improvisational format. 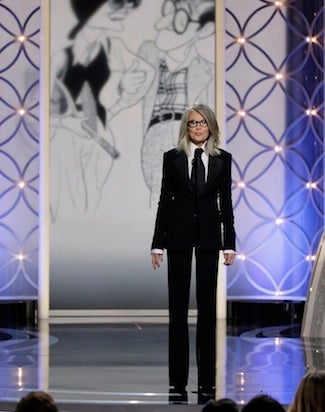 WORST: Diane Keaton's Speech Diane Keaton accepted the Cecil B. DeMille Award on behalf of Woody Allen, who famously doesn't do awards show. Allen's former muse and "Annie Hall" co-star droned on for more than her fair share of time -- a theme of Sunday night. At one point during her diatribe, NBC's telecast cut the audio for what would have amounted to several sentences of dialogue, though that may have just been a technical glitch. Then, Keaton inexplicably sang a lullaby -- unfortunately, NBC let that audio fly. 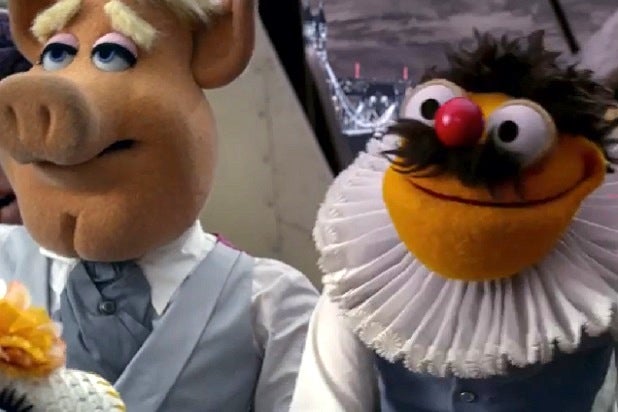 BEST Golden Globes Parody: The 'Muppets Most Wanted' Ad Continuing the top-notch satire that the world has come to expect of Kermit, Miss Piggy and the gang, the ad or "Muppets Most Wanted" expertly lampooned the awards process, claiming that the movie had been snubbed (because it isn't eligible yet), and spoofing the critics' quotes that dramatically litter movie ads -- the ad even took aim at the childish Twitter back-and-forth that accompanies awards shows in this modern age. Bonus: The ad boasted almost as many celebrities as the ceremony itself, including former Golden Globes host Ricky Gervais and Sunday night's co-host Tina Fey.