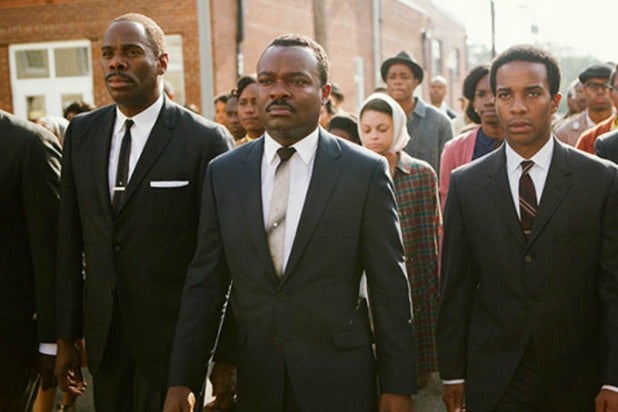 The 2015 Golden Globe nominations were announced Thursday morning and the Best Picture drama nominees included “Boyhood,” “Foxcatcher,” “The Imitation Game,” “Selma” and “The Theory of Everything,” while comedy nominees were “Birdman,” “The Grand Budapest Hotel,” “Into the Woods,” “Pride” and “St. Vincent.”

Heading into the season, many awards watchers speculated that “Unbroken” director Angelina Jolie would be the female filmmaker to watch, but instead it was “Selma” director Ava DuVernay who earned a Best Director nomination along with Wes Anderson (“The Grand Budapest Hotel”), David Fincher (“Gone Girl”), Alejandro Gonzalez Inarritu (“Birdman”) and Richard Linklater (“Boyhood”).

Jennifer Aniston was a welcome nominee for “Cake” in the Best Actress Drama category where she was joined by Felicity Jones (“The Theory of Everything”), Rosamund Pike (“Gone Girl”), Reese Witherspoon (“Wild”) and Julianne Moore (“Still Alice”).

Meanwhile, Jake Gyllenhaal surprised the doubters by scoring a nomination for his jaw-dropping performance in “Nightcrawler.” He’ll face stiff competition in the Best Actor Drama category, which is stacked this year thanks to Steve Carell (“Foxcatche”), Benedict Cumberbatch (“The Imitation Game”), David Oyelowo (“Selma”) and Eddie Redmayne (“The Theory of Everything”).

On the TV side, the HFPA spread the love in the Drama category, nominating Showtime’s “The Affair,” PBS’ “Downton Abbey,” HBO’s “Game of Thrones,” CBS’ “The Good Wife” and Netflix’s original series “House of Cards.”

“The Affair” wasn’t the only newcomer welcomed by the HFPA with open arms, as other new shows that received nominations were the CW’s “Jane the Virgin,” Starz’s “The Missing” and Amazon’s “Transparent,” all of which drew acting nominations as well.

ABC’s “Modern Family” was snubbed by the HFPA, which instead nominated “Girls,” “Orange Is the New Black,” “Silicon Valley,” “Transparent” and “Jane the Virgin” for Best Comedy Series.

HBO fared well in the TV Miniseries category, with “The Normal Heart” joining “True Detective” and “Olive Kitteridge,” as well as FX’s “Fargo” and Starz’s new series “The Missing.”

In the animated feature category, WB’s “The LEGO Movie” will compete against Disney’s “Big Hero 6” and DreamWorks Animation’s “How to Train Your Dragon 2.”

This year’s multiple nominees include Mark Ruffalo for “Foxcatcher” and “The Normal Heart,” Bill Murray for “St. Vincent” and “Olive Kitteridge” and Julianne Moore for “Still Alice” and David Cronenberg’s dark Hollywood satire “Maps the the Stars,” which is currently enjoying a stealth Oscar qualifying run in Los Angeles.