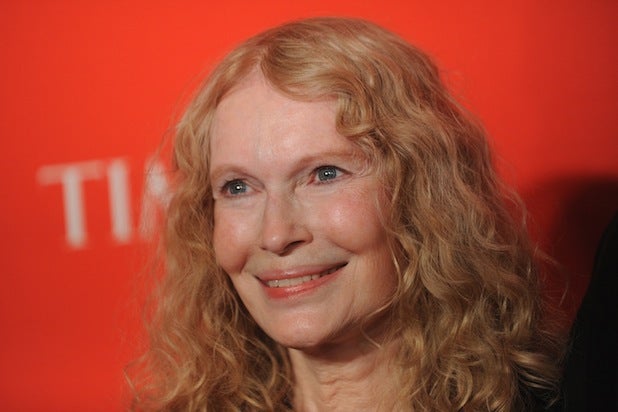 Just minutes before Diane Keaton took the stage to accept the Cecil B. DeMille award on behalf of Woody Allen, the “Annie Hall” director’s ex Mia Farrow tweeted that she was changing the channel from the Golden Globes to HBO’s “Girls.”

Time to grab some icecream & switch over to #GIRLS

Farrow split from Allen in a messy divorce after she discovered he was having an affair with their adopted daughter Soon-Yi Previn.

It’s unclear whether Farrow always intended to watch the season premiere of “Girls” or whether the timing was coincidental, with the HFPA preparing to bestow Allen with the equivalent of a lifetime achievement award.

Farrow’s son, Ronan Farrow, meanwhile, offered his own thoughts on Allen’s receipt of the award — in a far more pointed way.

“Missed the Woody Allen tribute – did they put the part where a woman publicly confirmed he molested her at age 7 before or after Annie Hall?” the younger Farrow tweeted.

For the record: A previous version of this story characterized Mia Farrow as Allen’s “ex-wife” but the two were actually never married. TheWrap regrets the error.