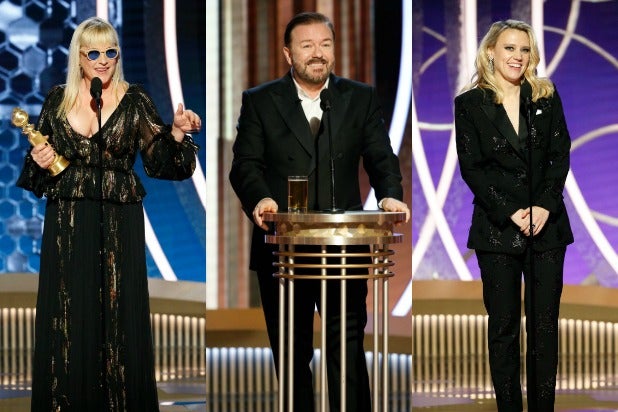 The Golden Globes 2020 show was filled with laughs, tears and calls to action. Host Ricky Gervais kicked off the awards show with a raunchy monologue and acceptances speeches took an emotional and political turn.

Here are five memorable moments from the awards show:

Ricky Gervais returned to the stage for the fifth time, getting himself bleeped two separate times during his monologue and triggering gasps from around the room.

Gervais, who joked this would be his final time hosting, called out the inevitable political speeches to follow.

“You say you’re woke, but the companies you work for, unbelievable! Apple, Disney, Amazon. Most of you spent less time in school than [teen climate activist] Greta Thunberg. If you win, come up, accept your little award, thank your agent and your God and f— off,” Gervais said.

His other target the big-budget flop “Cats.” Gervais made an extremely vulgar comment about Judi Dench that you can read here.

At the end of the show, he got bleeped two final times. “Sort of like working for Harvey Weinstein. You did it, I didn’t, shut the f— up!”

He then signed off “get drunk, take your drugs and f–k off.”

Presenting the Carol Burnett Award to Ellen Degeneres, McKinnon choked up when she explained the profound effect Degeneres had on her as both a comedian and as a teenager first realizing with her sexual orientation.

“She risked her entire life, and her entire career, in order to tell the truth. And she suffered greatly for it. Of course, attitudes change, but only because brave people like Ellen jump into the fire and make them change. And if I hadn’t seen her on TV, I would have thought, ‘I could never be on TV. They don’t let LGBTQ people be on TV,'” McKinnon said. “And more than that, I would have gone on thinking that I was an alien and that I maybe even didn’t have a right to be here.”

Russell Crowe, Others Call for Action to Stop Climate Change

Several presenters brought up the massive wildfires afflicting Australia, but perhaps none did so as forcefully as Globes winner Russell Crowe.

Crowe, who won Best Actor in a Limited series for portraying Roger Ailes in “The Loudest Voice,” wasn’t on hand to accept because, as presenter Jennifer Aniston explained, “he is at home in Australia protecting his family from the devastating bushfires.”

But Crowe did provide an acceptance speech in which he called on the world to deal with the climate crisis. “Make no mistake, the tragedy unfolding in Australia is climate change-based,” Crowe’s statement said. “We need to act based on science, move our global workforce to renewable energy and respect our planet for the unique and amazing place it is. That way, we have a future. Thank you.”

Fellow winners Cate Blanchett and Patricia Arquette, and also the Hollywood Foreign Press Association itself, also called attention to the situation in Australia.

The actress, who won for “The Act,” used her acceptance speech to comment on the current political climate and climate change.

“I know that tonight, Jan. 5, 2020, we’re not gonna look back on this night in the history books,” she began. “We will see a country on the brink of war, the United States of America. A president tweeting out a threat of 52 bombs, including cultural sites. Young people risking their lives all across the world. People not knowing if bombs are gonna drop on their kids’ heads. And the continent of Australia on fire.”

You can watch her full speech here.

Audiences love Tom Hanks, but none more than the Cecil B. DeMille winner’s family.

Hanks had to compose himself as he thanked his wife, Rita Wilson, and children.

“A man is blessed with a family sitting down front like that,” he told the audience, his voice cracking. “A wife who is fantastic in every way, who’s taught me what love is. Five kids who are braver, stronger, and wiser than their old man is, a loving group of people who’ve put up with me being away for months at a time. I can’t tell you how much your love means to me.”

Michelle Williams comes out swinging for the right to choose

During best actress in a limited series acceptance speech, the “Fosse/Verdon” star used her time to give an empathetic but unflinching defense of the constitutional right to abortion — and to call on women to vote.

“I know my choices might look different than yours, but thank God, or to whomever you pray to, that we live in a country founded on the principal that I am free to live by my principals and you are free to live by yours,” Williams said in part. “Women, 18 to 118, when it is time to vote, please do so in your own self-interest,” she said. “It’s what men have been doing for years. Which is why the world looks so much like them. But don’t forget, we are the largest voting body in the country. Let’s make it look more like us.”

Herstory was also made Sunday evening by Awkwafina, who became the first Asian American actress to win the Golden Globe For Best Comedy Film. Hildur Guðnadóttir, the “Joker” composer, became the first solo woman to win a scoring Globe.

These red carpet risk-takers turned heads at the 2020 Golden Globes.