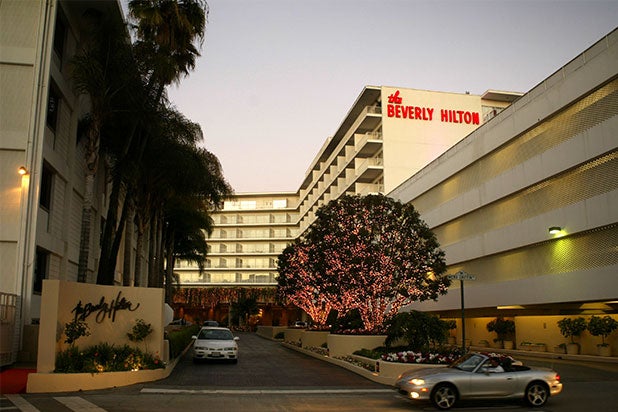 This Sunday, the Golden Globes will take place at the Beverly Hilton for the 56th consecutive year. But if that arrangement comes to an end in the near future, blame a nearby luxury condo development.

Beverly Hills had its own ballot battle in November’s contentious election, pitting the hotel’s owner against China’s richest man and Hollywood’s most aggressive buyer.

Oasis West Development, the parent company of the Beverly Hilton, placed a ballot initiative, Measure HH, in the city that would permit the developer to consolidate eight-story and 18-story condo towers into a 26-story, 345-foot building — with high-floor units that would certainly command premium prices. It would also have expanded a public park. Measure HH circumvented the city’s planning commission, and 56 percent of the city’s electorate ended up voting against it. Oasis West plans to go ahead with its original proposal, approved in 2008 and including the two towers and the under-construction Waldorf Astoria Hotel.

China’s Dalian Wanda Group owns the vacant lot directly across Merv Griffin Drive from the Hilton and recently gained city council approval for a project of its own containing 13-story and 15-story condo towers and a luxury boutique hotel. Wanda’s willingness to shell out $60 million in upfront development fees likely helped the process along, too.

Wanda emerged as the main opponent of Oasis West’s plan, and the two parties have battled it out for the good part of 2016 with lawsuits and even allegations of voter fraud.

And with last year’s logistical debacle at the Globes that had A-listers waiting for shuttles for hours in an office parking garage, Wanda could theoretically get back at the Beverly Hilton by not letting the hotel use its property for its marquee event. But that wouldn’t make a lot of sense, considering Wanda paid a cool $1 billion last year for Dick Clark Productions — which puts on the Golden Globes, and this would be the first Globes produced by a Wanda-owned Dick Clark.

Rohan a’Beckett, the deputy general manager of Wanda Beverly Hills Properties (the subsidiary that controls the Hilton-adjacent development site), told TheWrap that Wanda plans to open its doors and cooperate fully with the ceremony, just as it has for the last two years since acquiring the property in 2014.

a’Beckett said the Wanda site is primarily used for event production staging, red carpet bleachers and some after-parties, and all operational control is handed off to third-party coordinators.

“Our local office has been a strong supporter of this event since we first bought the property, and that spirit of cooperation is naturally continuing for this upcoming event,”  a’Beckett said.

But with Wanda now controlling Dick Clark and certainly no lack of suitable alternative venues (although maybe not as convenient to attendees’ homes as the Hilton), it could find a new home. The first-ever Golden Globes was held at the Fox Studios in what’s now Century City, and the awards gala also made stops at the Beverly Hills Hotel and Roosevelt Hotel in Hollywood in early years. The Globes have occupied their current home at the Hilton’s International Ballroom since 1961. The Beverly Hilton has not yet responded to a request for comment.

Wanda’s planned boutique hotel across the street has its own ballroom, but at just 285 seats, it’s way too small to host the Globes. A spokesman for Wanda declined to comment on whether the company has explored moving the ceremony, but a source close to Wanda said that Chairman Wang Jianlin, who isn’t afraid to take on powerful Hollywood types, has become more involved with Dick Clark.

Beverly Hilton General Manager Sandy Murphy declined to comment to TheWrap on the possibility of the Globes moving, citing “no specific knowledge of the deal involving Dick Clark Productions and its ownership change.”