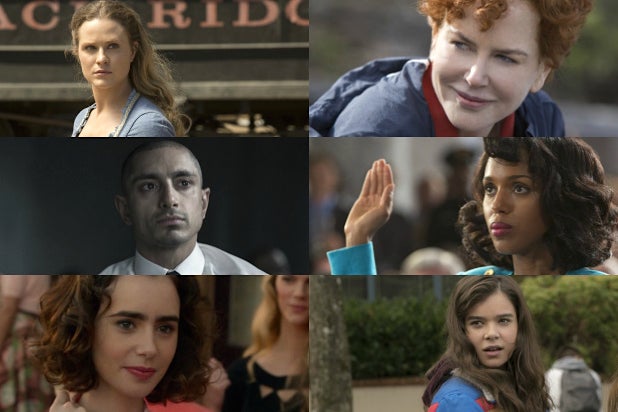 The Hollywood Foreign Press Association handed out its nominations for the 2017 Golden Globe Awards on Monday morning and those in Hollywood lucky enough to be recognized are saying they’re “thrilled,” “shocked” and “grateful.”

Here are some of the nominees’ reactions, as told to TheWrap:

Emma Stone, Best Performance by an Actress in a Motion Picture – Musical Comedy — “La La Land”
“Wow! What a great way to start a Monday. I am so honored to be a part of this incredible film. Thank you to the Hollywood Foreign Press Association and congratulations to Damien, Ryan, Justin and the rest of my ‘La La Land’ family.”

Amy Adams, Best Performance by an Actress in a Motion Picture – Drama — “Arrival”
“Thank you so much to the Hollywood Foreign Press Association who have always been so incredibly supportive of me throughout my career. I’m really honored to be recognized for ‘Arrival,’ a film I so deeply loved working on. Thank you to Eric for his brilliant script, Jeremy for being an amazing partner and Denis for his incredible guidance and capturing the true heart and soul of this film. I’d also like to congratulate Tom Ford and Aaron Taylor Johnson for their ‘Nocturnal Animals’ nominations.”

Nicole Kidman, Best Performance by an Actress in a Supporting Role in a Motion Picture — “Lion”
“This nomination is even more emotional and I’m more grateful than ever before. Thank you to the Hollywood Foreign Press!”

Lin-Manuel Miranda, Best Original Song Motion Picture — “Moana”
“Gracias. Merci. Grazie. Danke sehr. Mahalo. Thank you Hollywood Foreign Press Association for this tremendous honor. Congratulations to my fellow nominees. Over two years ago, I was lucky enough to have been given my dream job, writing songs for a Disney animated film, alongside the amazing Opetaia Foa’i and Mark Mancina. Today, for Moana to be recognized for what we created is truly beyond comprehension. ‘How Far I’ll Go’ not only embodies the spirit of our heroine but the central lesson from the film–dream big, listen to your gut, don’t give up, never forget where you came from, and one day you might just save the world.”

Kerry Washington, Best Performance by an Actress in a Limited Series or Motion Picture Made for Television — “Confirmation”
“Now, more than ever, we must champion stories that highlight our bravest voices in times of adversity. As an actress and a producer I am so grateful to the HFPA for acknowledging ‘Confirmation’ in this way.”

Riz Ahmed, Best Performance by an Actor in a Limited Series or Motion Picture Made for Television — “The Night Of”
“Thank you HFPA! I’m absolutely thrilled to be counted amongst this year’s nominees. I’m deeply indebted to Steve Zaillian, Richard Price, HBO, to all the cast and crew of ‘The Night Of’ for their dedication in bringing this timely story to life, and all those who shared their stories of prison and prejudice with me in researching this role. It was an honour to portray Nas, and through him the untold stories of so many.”

John Turturro, Best Performance by an Actor in a Limited Series or Motion Picture Made for Television — “The Night Of”
“It’s nice to be invited to the party, thank you HFPA. I am especially pleased to share it with my acting partner Riz Ahmed. And of course, our indomitable leader Steve Zaillian and Richard Price.”

Evan Rachel Wood, Best Performance by an Actress in a Television Series – Drama — “Westworld”
“Being a part of ‘Westworld’ is such an honor. Dolores is the greatest character I’ve ever played. I’m so thankful to everyone on the show and that these groundbreaking complex roles are being written for women and even more grateful that the Hollywood Foreign Press is recognizing me for it. Thank you.”

Rami Malek, Best Performance by an Actor in a Television Series – Drama — “Mr. Robot”
I’m incredibly grateful to the Hollywood Foreign Press Association for recognizing me in this group of distinguished and accomplished actors. I’m thrilled to be sharing this moment with my co-star and fellow nominee Christian Slater. I am so thankful for the brilliant mind of Sam Esmail, USA Network, Universal Cable Productions, and the exceptionally gifted cast, crew, and writers of “Mr. Robot.”

Co-creators and showrunners Jonathan Nolan and Lisa Joy on HBO show’s three nominations, including Best Television Series Drama — “Westworld”
“It’s thrilling. We’re very excited. People say this but with us it’s very much the case that it’s a labor of love which took a couple of years to get off the ground… It takes special actors to portray all of these characters, the host characters in particular. We have so much love for our team, the crew and cast, and feel very fortunate.”

Dev Patel, Best Performance by an Actor in a Supporting Role – Motion Picture — “Lion”
“I literally just woke up to this news. I am so humbled to be acknowledged in a category alongside these incredible gentleman. I’m feeling an overwhelming sense of gratitude for my real family back home in London and in India and for my ‘Lion’ family, especially for the leader of our pride, director Garth Davis. The best thing about this though is that my mom is going to be really f-ing happy.”

Writer-Director Damien Chazelle on seven “La La Land” nominations (the most of all titles this year), including for Best Director – Motion Picture and Best Screenplay – Motion Picture
“As I’m in LA, it was a very early start to the day but the best possible news to wake up to, and I am so honored and thrilled by the nominations. Thank you so much to the Hollywood Foreign Press for celebrating LA LA LAND and for recognizing the incredible work of all the cast and crew and especially Emma [Stone], Ryan [Gosling] and Justin [Hurwitz, song writer nominated for Best Original Song and Best Original Score].”

Lily Collins, Best Actress Motion Picture – Musical or Comedy — “Rules Don’t Apply”
“I’ve never felt so shocked, honored, and proud. Thank you from the bottom of my heart to my fearless leader and mentor Warren Beatty, the Hollywood Foreign Press, and to all those involved with ‘Rules Don’t Apply.’ Sharing this moment with my mom sitting on our couch in the dark is something I’ll never forget. It’s a complete dream come true. I still can’t breathe.”

Also Read: 'The Crown': 7 Reasons the Golden Globes Darling Is So Worth Watching (Photos)

Hailee Steinfeld, Best Actress Motion Picture – Musical or Comedy — “The Edge of Seventeen”
“I am overcome with excitement and joy to be nominated for ‘The Edge of Seventeen.’ We set out to make a film that would resonate with men and women of all ages because the message of self-acceptance and embracing your truth is universal. Contrary to the reality that I face as a young actress on a daily basis, ‘Eo17’ isn’t a film about a teenage girl wrestling with her identity and self-worth because of the influence of social media defining her popularity. Instead, it’s an anthem for self-acceptance and I’m so grateful to Jim Brooks and Kelly Fremon-Craig for granting me the opportunity to play such a complex and unlikely heroine.”

Riley Keough, Best Performance by an Actress in a Limited Series or a Motion Picture Made for Television — “The Girlfriend Experience”
“I am so honored and honestly shocked to be recognized for my role in ‘The Girlfriend Experience.’ I have been very luck to work with Steven Soderbergh throughout my career. I’m thankful for Amy Seimetz and Lodge Kerrigan for creating this complicated female character, and even more grateful to the HFPA for recognizing such an unusual character.”

Bob Odenkirk, Best Performance by an Actor in a Television Series – Musical or Comedy — “Better Call Saul”
“Blown away again to be recognized in the sea of excellence that is TV drama right now. I’m going to take it as a compliment for every aspect of Better Call Saul. The writing, the entire cast around me and everyone involved in the production of it. I really love getting to know the empathetic character Jimmy McGill, the man behind the not so empathetic, rapscallion Saul Goodman. Thank you to the Hollywood Foreign Press!”

Jeffrey Tambor, Best Performance by an Actor in a Television Series – Musical or Comedy — “Transparent”
“Maura Pfefferman continues to be the role of a lifetime, and I’m honored to be recognized by the Hollywood Foreign Press Association. I’m very excited to celebrate our series nomination with the amazing Jill Soloway and my extraordinary co-stars.”

Co-directors Ron Clements and John Musker and producer Osnat Shurer, Best Motion Picture – Animated — “Moana”
“In our 40-year careers, no film has been such a labor of love or more satisfying than ‘Moana,’ about a young girl who saves the world. We’re so deeply honored that the hard work of the artists and cast is recognized by the HFPA.”

Co-directors Rich Moore and Byron Howard and producer Clark Spencer, Best Motion Picture – Animated — “Zootopia”
“Thank you, Hollywood Foreign Press, for this honor. It means so much to every single person who worked so hard to make ‘Zootopia;’ and to make it a film that we hoped would not only entertain, but say something meaningful as well.”

Director John Carney, Best Motion Pictures – Musical or Comedy — “Sing Street”
“I have long celebrated the musical genre, and am so honored ‘Sing Street’ was recognized by the HFPA in this category. This morning I am thrilled to be the embodiment of “third time’s a charm!”