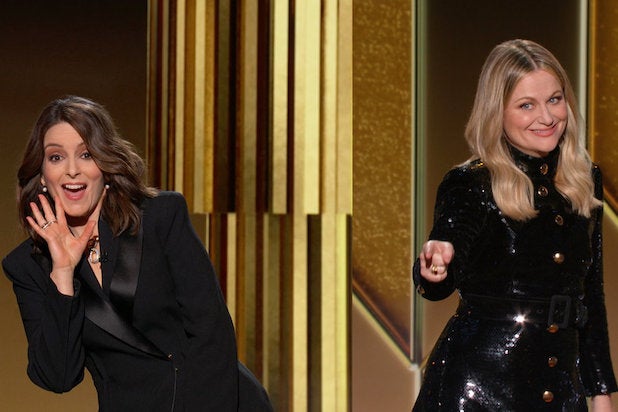 Tina Fey and Amy Poehler delivered their fourth opening monologue as hosts of the Golden Globes on Sunday, even though they were on different coasts.

Due to the pandemic, Fey is doing her hosting duties from New York, while Poehler is in Los Angeles — which was the subject of their first joke of the night.

“Good evening, I’m Tina Fey coming to you from the beautiful Rainbow Room in New York City where indoor dining and outdoor muggings are back,” Fey said.

“Yes, and I am Amy Poehler here at the Beverly Hilton District 7 New Angeles. And this is the 78th annual Hunger Games.”

The duo also joked about the different makeup of the audience this year. Fey said, “Normally this room is full of celebrities. But tonight our audience on both coasts is made up of smoking hot first responders and essential workers. We are so grateful for the work that you do and that you’re here so that the celebrities can stay home safely. Thank you so much.”

And Fey and Poehler poked fun at the nominated movies and television shows — and even joked that it can hard to tell the difference between the two.

“At the Golden Globes, we give out awards for movies and TV,” Poehler said. “But I mean, it’s hard to tell them apart this year because movie theaters were closed, and we watched everything on our phones. … TV is one that I watch five hours straight. But a movie is the one that I don’t turn on because it’s two hours. I don’t want to be in front of my TV for two hours. I want to be in front of the TV for one hour, five times.”

You can watch the full monologue from this year’s Golden Globes below. And to check out a full list of the night’s nominees and winners, click here.

Hosts Amy Poehler and Tina Fey kick off The #GoldenGlobes from coast-to-coast! 🌟 pic.twitter.com/QpnIVLlatE