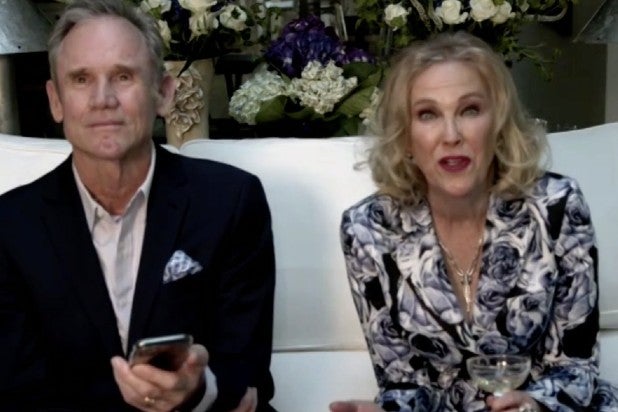 Of the many things that looked different at the Golden Globes this year, one thing remained the same: playing actors offstage with orchestral music when their acceptance speech ran long. At least, for Catherine O’Hara.

After O’Hara won the Golden Globe for Best Performance by an Actress in a Television Series – Musical or Comedy for her performance in “Schitt’s Creek,” her husband, production designer and director Bo Welch, had his phone on-hand for her acceptance speech. What sounded like pure garbled noise at first quickly became distinguishable as applause sound effects.

Welch played the “live” applause as O’Hara started her speech, and again as she gave credit to her co-stars and “Schitt’s Creek” creators Eugene and Dan Levy, for allowing her to “wear 100 wigs, and speak like an alien.”

As her speech went on, Welch abruptly started what sounded like orchestral music, keeping the tradition of awards shows playing off actor’s whose speeches start to run long. It’s unclear if O’Hara was in on the joke, as she looked over to him in apparent surprise when the instrumental started, yelling “No! What?”

That said, O’Hara is a comedic genius – it wouldn’t be all that surprising if she was simply acting upset over the stunt.

O’Hara was just the third Golden Globe winner of the night, but the show made no attempts at playing off those that came before her – Daniel Kaluuya, who won Best Performance by an Actor in a Supporting Role in Any Motion Picture for “Judas and the Black Messiah,” and John Boyega, who picked up Best Performance by an Actor in a Television Supporting Role for his role in “Small Axe.”