Ceelo Green’s head-to-toe golden outfit at the 59th Grammy Awards set off Twitter, but the best response was photoshopping him into Trump Tower photos.

Buzzfeed producer Jesse McLaren took to Twitter to give everyone what they didn’t know they needed. He added a menacing, masked Ceelo to the background of various photos of Donald Trump and his family at Trump Tower. The best part is that Ceelo absolutely looks like he belongs in Trump’s gold-plated world.

Also Read: Grammys 2017: What the Hell is CeeLo Green Wearing?

I edited Ceelo Green into the background of pics of Trump in his apartment and holy shit 😂😂😂 pic.twitter.com/VurY7DMJ1w

Ceelo’s golden getup, making him look like some kind of Flash Gordon villain, lit up Twitter with great reactions. But Trump’s love of gold makes him a perfect potential Trump Tower fixture. And imagining Ceelo as a Trump Tower honor guard, like those red-cloaked guys that guard the Emperor in “Return of the Jedi,” is probably the perfect use of the his outfit.

It’s well known that Trump has a personal set of bodyguards apart from his Secret Service detail. Now he just needs a giant blade like Deobia Oparei’s “Game of Thrones” character, Areo Hotah:

Also Read: Someone Please Explain to Us What Mike Posner is Doing at The Grammys (Video) 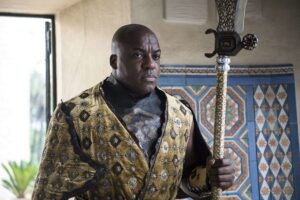 Or maybe menacing Golden Ceelo’s role at Trump Tower would be more functional and less scary. He could act as Trump’s personal interpreter, since he’s dressed as C-3PO — call him Ceelo-3pO.