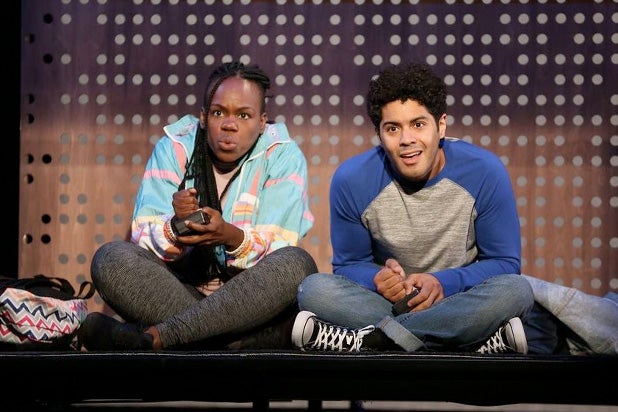 The promising playwright Ngozi Anyanwu, who made a striking New York debut earlier this year with “The Homecoming Queen,” returns to Off Broadway’s Vineyard Theatre with a memory play called “Good Grief” whose specificity is both its strength and one of its weaknesses.

Anyanwu also stars in the production as Nkechi, the daughter of Nigerian immigrants raised in suburban Bucks County, Pennsylvania, in the late ’90s, as she comes to terms with the sudden death of her childhood friend and young adulthood almost-lover in a car accident.

As played with easy-going charisma by Ian Quinlan, MJ is a light-skinned James Dean type who’s smart but unambitious, a smooth cat compared to the more academically driven Nkechi with her more rough-around-the-edges feline energy.

In a series of nonlinear scenes that span more than a decade, Nkechi tries to overcome her crippling period of mourning for MJ in conversations with various people in her life: her football-loving father (Oberon K.A. Adjepong), her psychiatric-nurse mother (Patrice Johnson Chevannes), her blunt-smoking, malt-liquor-drinking brother (Nnamdi Asomugha) and her high school crush (Hunter Parrish).

Each is uncomprehending of just how stuck Nkechi seems to be over MJ’s death — or why she’s dropped out of medical school and holed up at her parents’ home, seemingly incapable of moving on with her life.

The play doesn’t shed much light on this question — nor does it gather much in the way of narrative momentum over the course of its 100-minute running time. And occasional efforts to elevate the material to the mythic seem like too big a stretch for what amounts to a slight, if well-observed story of loss.

But there is much to admire here, particularly in Anyanwu’s gift for dialogue and for depicting the experience of a second-generation African American growing up in lily-white suburbia when Tupac and Biggie were just as popular as The Incredible Hulk and “The Goonies.” (The snippets of hip-hop classics played on boomboxes, of course, add just the right touch.)

And both as actress and playwright, Anyanwu also has a gift for breaking the fourth wall to reshape her memories — sometimes following reimagined scenes with shorter takes of what “really” happened. Indeed, some lines are repeated verbatim by different characters in subsequent scenes, to further challenge our grip on what might be true.