Children’s horror author R.L. Stine has sold 400 million books — a fact dutifully recounted in “Goosebumps,” the new comedy-adventure named after Stine’s 200-odd novella franchise. A few of the prolific writer’s standbys make the leap from page to screen: the amiable sarcasm, the dad-joke puns, the mild frights and the cornball monsters. (Making a cameo is the villain of “Goosebumps No. 28: The Cuckoo Clock of Doom.”)

But because most readers age out of the book series by the time they receive their elementary school diplomas, director Rob Letterman (“Gulliver’s Travels,” “Monsters vs. Aliens”) and writer Darren Lemke take inspiration not from the paperbacks themselves, but from how readers who have since outgrown them remember Stein and his library staples. The author’s reclusiveness becomes part of the storyline, and the variable quality of his scares is fondly mocked: Homicidal lawn gnomes and the Abominable Snowman of Pasadena anchor two set pieces.

The rest is pure Hollywood gloss: Hunky Zack (Dylan Minnette) moves to a new town where he, the astoundingly beautiful girl next door (Odeya Rush), his dorky pal (Ryan Lee), and world-famous writer (and monster hunter) R.L. Stine (Jack Black) end up amid car chases, explosions, a hail of knives, and a Ferris wheel rolling down a mountain.

It’s rather far from the largely psychological books, but it’s hard to imagine that “Goosebumps” purists would mind, because the movie mostly works. Goofily self-aware and wholesomely boisterous, it’s a children’s picture whose sense of spooky fun readily diverts from its quibble-worthy messaging.

Convinced that his persnickety new neighbor Mr. Shivers has harmed his teenage daughter Hannah, Zack sneaks into the house next door to save her. There, Zack and his friend Champ discover a shelf full of leather-bound Goosebumps manuscripts with locks on them. They open one out of curiosity — who binds Goosebumps books in leather? — and out pops the colossal Abominable Snowman, annoyed that his head grazes the living-room ceiling. Exiting another tome is an embittered talking dummy (voiced by Black), who’s determined to make Stine pay for keeping him locked in a hardback by releasing all the monsters in the Goosebumps series. 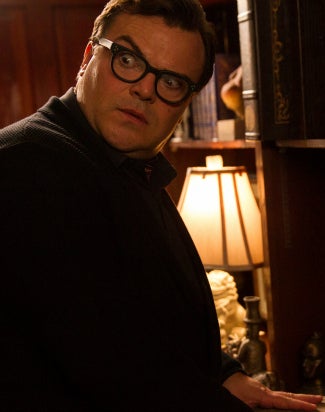 It’s a dopey premise, and the backstory for Stine’s magical powers of creation is superfluous at best, but it gives an excuse for the quartet to careen from one imaginatively plotted scrape to the next. The slightly irreverent take on the book series means that the grab-bag assortment of fiends is allowed to be wonderfully silly, none more than the knife-throwing garden gnomes whose every cock of an evil eyebrow is accompanied by a creepy crunch of ceramic grinding against ceramic.

Black is the cast’s only big name, reprising his familiar but welcome role as a fussy dweeb, this time with a (probably intentionally) wavering mid-Atlantic accent. Amy Ryan as Zack’s mom is utterly wasted and Jillian Bell as his cat-lady aunt deserves better. A quick appearance by the real Stine is more groan-worthy than Stan Lee‘s cameos in the Marvel movies. The script has as many plot holes as it does monsters and the resolution of a secret about Stine’s daughter feels like the wrong one in a movie that wants to recognize real tragedy in the world.

Perhaps disappointingly to some, the movie makes the barest gestures at being scary. But it offers something arguably better: goosebumps of delight.