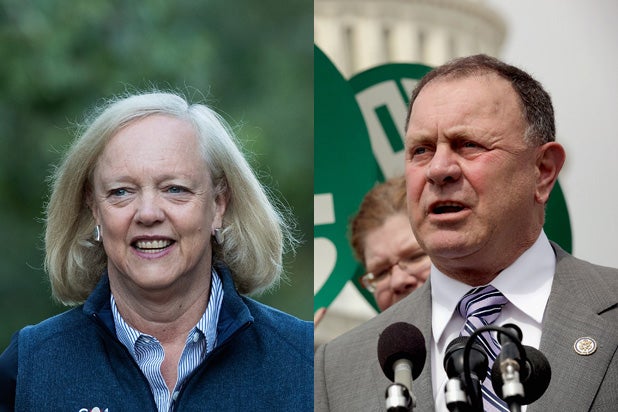 In the mounting backlash against Donald Trump from inside his own party, GOP fundraiser Meg Whitman and Republican congressman Richard Hanna have both announced that they are backing Democrat Hillary Clinton for president.

Whitman, a top Republication donor, said in a statement Tuesday that she cannot support a candidate who has “exploited anger, grievance, xenophobia and racial division,” the Associated Press reported.

The Hewlett-Packard executive went on to say that the GOP presidential nominee’s “demagoguery has undermined the fabric of our national character.”

She said that his “reckless and uninformed” positions on critical issues from immigration to the economy to foreign policy show that he lacks the policy depth and judgment a president needs. In addition, Whitman believes that national security would be in danger under Trump, and she encourages all Republicans to support Clinton in November.

Hanna has also broken ranks to endorse the Democratic nominee, denouncing Trump’s attacks on the Muslim parents of a soldier killed in Iraq and calling Trump “unfit to serve,” according to the New York Times.

While other GOP members of congress had previously refused to endorse Trump, Hanna was the first Republican congressman to actively join forces with the Democrats against him.

Hanna, a three-term Republican from Oneida County, New York, announced the move in an op-ed interview with Syracuse.com. He said he decided to take action after watching Trump criticize Khizr and Ghazala Khan, the Muslim-American parents of a U.S. Army captain killed in Iraq.

“I saw that and felt incensed,” Hanna said. “I was stunned by the callousness of his comments.

“I think Trump is a national embarrassment. Is he really the guy you want to have the nuclear codes?”