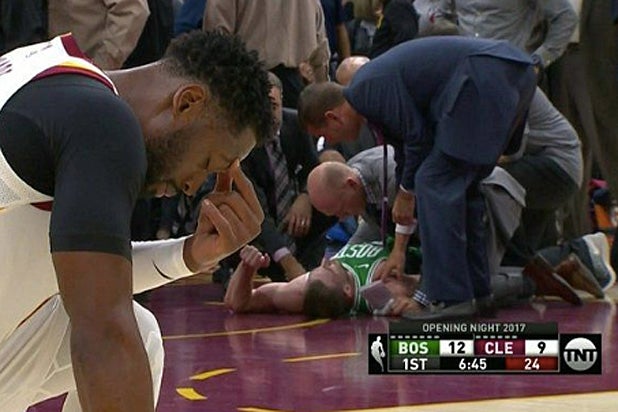 The week’s most emotionally reacted-to TV personalities and characters

A Celtics forward, a Yankees outfielder and a newlywed rapper had viewers talking passionately on social media over the past seven days.

The Wrap has partnered with Canvs, the emotion measurement company, for a weekly look at some of the characters and personalities that have TV viewers the most worked up on social media. The data below covers Oct. 11-17 and is drawn from the most emotionally reacted-to television programs, including broadcast, cable, streaming and PPV.

The NBA 2017 season opening game on TNT between the Boston Celtics and Cleveland Cavaliers was the most emotionally-reacted to program of the period measured, with 291,232 Emotional Reactions (ERs). Mere minutes into the game, Celtics forward Gordon Hayward suffered a horrible leg injury and was carried off the court on a stretcher. There was an immediate outpouring of support with fans sending positive thoughts and prayers. It was later revealed that Hayward had dislocated his ankle and fractured his tibia, and it’s unclear when (or if) he’ll return to the court this season.

Yankees outfielder Brett Gardner was the most-mentioned player of Game 5 of the ALDS (broadcast on Fox Sports) between the New York Yankees and Cleveland Indians (108,338 ERs). During an exciting at-bat with two runners on base, Gardner fouled off five pitches before getting a solid hit, leading the Yankees to score two runs, giving them a three-run lead over the Indians (and later they would go on to win 5-2). Fans applauded Gardner, with some even issuing declarations of love.

Unreal at bat by Brett Gardner

BRETT GARDNER IS THE GOAT.

BRETT GARDNER I LOVE YOU

Also Read: 'The Mane Event': How BET Ruined the Royal Wedding, According to Twitter

BET has a new limited series (a “10-part wedding special”) called “Gucci Mane & Keyshia Ka’Oir: The Mane Event” (71,417 ERs) that’s all about hip-hop couple Gucci Mane and Keyshia Ka’Oir getting married and starting their new family. While the first episode was focused on the couple’s extravagant wedding and featured lots of Keyshia, it was actually Gucci who was the most mentioned during the night. Comments ranged from simple congratulatory messages to discussions around outfits and looks (some people thought Gucci looked better than Keyshia).